By AAJ STAFF
January 26, 2004
Sign in to view read count
Four days of jazz, thousands of visitors, in a city of millions that never sleeps. Eight dollar shots, fifty dollar covers, and $180 "budget" hotel rooms. Sheer masses of record labels and jazz schools. It's all about the music. The Annual Conference of the International Association for Jazz Education is the single biggest event in the jazz world, and this time it was truly enormous. I stayed two nights in the midtown Manhattan Sheraton (Janyuary 21-22), then two nights in Brooklyn (January 23-24). Here's a quick look at some people I met along the way.

The esteemed Publisher of All About Jazz showed up around eight and dropped off his stuff in our room at the Sheraton. It's always great to see Mike, something that happens way too rarely. We doodled on the laptop (hooked up to a high bandwidth connection in the room), checked out the web site, and visited a few jazz clubs around the city as a cheap excuse to test AAJ's Club Guide . Spent half an hour screwing around with digital cameras and just generally shot the shit. Eventually we set out for the 55 Bar in the Village, our venue of choice. (Photo: AAJ mobile command center.)

Weds, 10:30 pm: Queva Lutz
At the 55 Bar , which was a pleasantly intimate discovery, Mike Stern was playing in a hard-jamming quartet with Chris Potter and Francois Moutin. (The drummer was unremarkable and my memory is miserable.) Unfortunately there were no seats left and no place to stand, so Queva (the owner of the club) guided us out shortly after the first set started. She is a very grounded, very intelligent woman—friendly and accommodating, just what's called for in that situation. We went out for Thai food, came back for the second set, and stayed till 2 am.

Weds, 12 am: Trucker hero
We met Kurt (last name unknown) in the line at the 55 Bar. He had piloted a truck from Manhattan, KS (IAJE HQ) to Manhattan, NY carrying all-essential T shirts, guide books, and hardware. Apparently the rental truck wasn't working quite right, which meant its lights blinked out almost randomly for several long seconds at a time on the road. Just imagine driving a truckload of jazz paraphernalia through the mountains at night with no lights. Our new friend operates a string sales/repair place in Kansas, plays the bass, follows the music. Good chats.

Thurs, 2 pm: Brian Lynch
At the clave workshop the next day, Brian Lynch led a very friendly, accessible introduction to the clave, rumba and other Latin jazz rhythms. Lynch understood that he had to start simple (everyone clapping the basic five-note beat) and build up (to two renderings of the Miles Davis tune "Solar," before and after the imposition of clave). Given the heterogeneity of the audience, his approach worked perfectly.

Sirius is one of two satellite radio giants in the US, a subscriber-only service with 100 channels, five of which are devoted to jazz. They have a huge midtown headquarters full of glass and metal, 45 recording studios, a massive satellite control center, and DJs scattered everywhere doing announcements. In fact, Jason Moran's Bandwagon was in the front studio going nuts. Ken Hatfield—jazz guitarist and savvy businessman, leader of the well-received Phoenix Rising—joined the group of 40 or so that went on the tour. He's sharp, he's direct, he's not afraid to get down to nuts and bolts. There are a lot of nuts and bolts in the music business, but Ken Hatfield isn't afraid to twist them all. (Photo: Sirius satellite nerve center.)

Bassist Francois and drummer Louis Moutin form half of the Moutin Reunion Quartet , which just released a second record, Red Moon . Sunnyside Records hosted a private party at the Iridium , and it was hard not to home in on the rhythm section. The brothers Moutin share an active, intelligent, and warm approach to the music, and they lock in like tongue in groove. It was nice to be in a relatively open space with few people. The Iridium made an excellent first impression. (Photo: Jean-Michel Pilc, piano; Francois Moutin, bass.)

Thurs, 8pm: Ted Panken
Mike Ricci and I went to a Thai place for dinner with writers: Howard Mandel, AAJ's David Adler , Ted Panken, and Ashley Kahn. This was my first introduction to Howard , who is a very cool, open, friendly, and honest guy. He's an excellent ambassador for the music, and he understands writers. Ted, on the other hand, had a problem. As he most tactfully explained, he didn't like me. And he didn't like to be touched. He didn't want to sit next to me. Mike and I left before I hit the idiot. He can touch himself all he wants.

Franz (who came up from DC) is one of the most enterprising writers I have ever met. He joined All About Jazz not long ago, and this was the first time I saw him in person. Franz looks great in a hat, he does not hesitate to go up and talk to people, and he's got an excellent sense of humor. We spent some time hanging out with Mike in the hotel room, only to be interrupted by a staff member telling us to quiet down. A real party knows no rules until it meets The Man.

Fri, 6pm: Fred Bouchard
The Jazz Journalists Association hosted a gathering for its members in Le Jazz Au Bar , a new club on 58th Street in Manhattan where shows will purportedly cost $50, with a $25 drink minimum. Only in New York, right? Elaborate Victorian-style couches everywhere, lots of nooks and crannies, and these utterly stupid-looking hotties in tiny black outfits roving around with appetizers. I was introduced to a fellow Bostonian writer, Fred Bouchard , who very shortly thereafter pressed his card into my hand and told me he wouldn't do anything for free, then passed along. Thanks, Fred, I won't be calling, don't worry.

Fri, 8:30 pm: Steven Joerg
Steven Joerg runs AUM Fidelity (in fact, he pretty much is AUM Fidelity), a label that specializes in New York out jazz, though recently he's dipped into electronica and punk too. Steven's got a most righteous place in Brooklyn with a beautiful old pool table, a serious sound system, and miles of discs. We kicked the jams, shot pool, and generally acted stupid. Steven is a deep, grounded guy who's not afraid to speak his mind, even if you disagree. And the legends about his skills with a stick are well-deserved.

Sat, 4 pm: Vijay Iyer
Vijay Iyer burst out last year with two huge records in 2003 (including Blood Sutra ), and on this panel he was joined by critics (and musicians) with an interest in the subject of race. The group seemed to agree that The Bad Plus , an all-white piano trio, was getting far more press than it deserves, simply because of race. That's total bullshit, but the point about white musicians getting favorable press is well taken. Iyer leveled with the basic facts about the situation and provided some insight though his own experiences as a player who's neither black nor white. Race is most definitely not a binary parameter. Is there anyone who's all black or all white, anyway?

Sat, 6 pm: Matt Wilson
The Matt Wilson Quartet played to a packed ballroom full of fans. Wilson is a gifted drummer with unbelievable facility and a sense of purpose that means every bar gets a different personalized treatment. After a zany sing-along, Wilson and his partners donned shimmery glitter wigs for the closing punk/thrash number, whereupon Andrew D'Angelo smashed his alto on the stage (Wilson warned: "Don't do this with your instruments at home") and the crowd went wild. Nobody will accuse Matt Wilson of being boring.

Sat, 7 pm: Dianne
Out of completely nowhere I bumped into a kind-looking woman in the Hilton lobby who wanted to chat. She said her name was Dianne, she was new to the city, and she wanted to be social that evening. It was pretty clear that Dianne was not there for the jazz meeting, but that didn't stop her from stepping forward. We spent a few minutes together, then I let her know that I wasn't interested, but it wasn't personal. It was getting cold outside...

Sat, 8 pm: Sweat
In a fit of absent-mindedness, I missed my last stop heading out to Brooklyn for the night, so I got off at 15th Street and waited for the train coming the other way. Two homeless people came up to say hello: a guy with a bandaged ankle and a cane, and his lady friend with big colorful clothes. After confirming that yes, indeed, I wasn't the police (and no, I wasn't going to tell anyone), they popped down the gate into the tunnel to go home for the night. The man introduced himself as "Sweat."

The last time they were rousted by the authorities, the man who went in there told them to "Go home!" Now that is utterly ironic. I handed Sweat's woman friend $9 out of my wallet, since she didn't smell of alcohol and seemed a whole lot more under control of the situation. No way these people were scamming me. If I can stay in a $180 hotel room, I can buy two homeless people dinner. Cheers, Sweat! Keep off the ankle, okay? Don't let 'em chase you down. 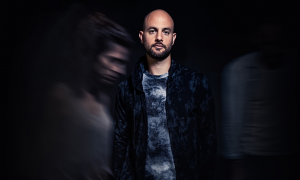