By SAMUEL CHELL
February 25, 2004
Sign in to view read count 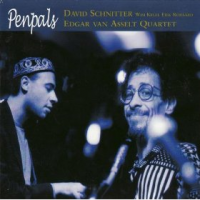 In the late 1970's the Newport Jazz Festival programmed a Carnegie Hall concert featuring the groups of both Art Blakey and Horace Silver along with some all-star alumni guests. The impression of that concert that lingers with me to this day is the passionate and fiery if not show-stopping performance of Blakey's tenor man, David Schnitter. Had the title "Little Giant" not already been bestowed upon Johnny Griffin to distinguish him from "long, tall" Dexter Gordon, it might just as easily have been worn by the slightly-built Schnitter, with his deceptive Dexter-like power and forceful, emotive story-telling.

Pen Pals is the first recording under David Schnitter's name since 1979 (none of his four dates for Muse has been reissued). It's not only an impressive return to form by a musician who had all but vanished for over twenty years (see November AAJ profile ), but it records his remarkable musical growth as well. Both his tone and rhythmic/harmonic concept now owe more to Coltrane than to Gordon. The natural placement and strength of his sound, which is more focused and consistent, is now in the mid to upper registers of the horn; his phrasing is less symmetrical and predictable; his use of the altissimo register is more judicious, an integral part of his musical vocabulary rather than a dramatic side-show. When he does employ the lower register of the horn, it serves as a kind of contrasting subtext—characterized by incisive Rollins-like articulations—to the harmonic virtuosity of his upper-register motifs.

Apart from the striking performance of the leader, Penpals is a thoughtfully programmed, carefully produced, and immensely satisfying album. At first glance, the CD seems transparently naive—from the cover title (why not something sexy like "Return of the Messenger"?) to the titles of original tunes ("Drone Tone" is as prosaic as it is descriptive) to the liner notes (about two guys from different countries and generations who like each other). But after repeated listenings, the plain, disarming production values of the album and the deeply felt, mutually inspired performances contained therein seem like a perfect match.

Van Asselt, who lists Bill Evans and Bud Powell as influences, features the former's chord voicings and, at least on the up-tempo tunes, the latter's facile and intricate right-hand constructions. His soloing on the slow and medium tunes, though often repetitive and stiff, in some respects serves as an effective complement to the Schnitter's more adventurous, explorative statements. And as an accompanist, Van Elder is so locked in with the horn's phrasing that there's never the sense that this is another "phoned-in" tenor plus rhythm section studio session. Kegel and Robaard are equally integrated into the collaborative fabric. These are four musicians who not only respect one other but, despite the geographical divide, share an uncommon musical telepathy.

This record is available online from Munich Records and Playland Records .