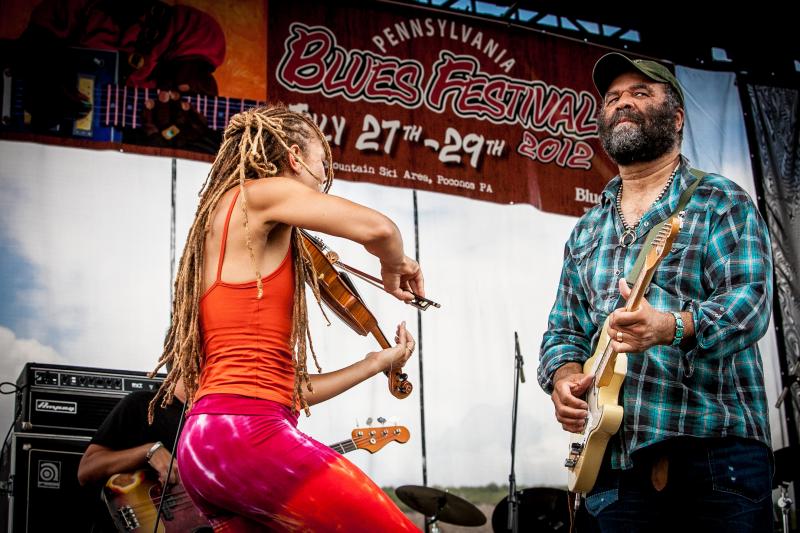 For 21 years, the Pocono Mountains have been the epicenter of the blues, attracting thousands to the bottom of a ski slope for three days each summer. Blue Mountain Ski Resort lent itself well to the fifteen national acts that performed on two stages over the warm, and sometimes rainy, July weekend that featured great food, music and crafts. Veteran festival producer Michael Cloeren assembled an all-star cast from the blues scene to play for ardent fans of the genre. But not just any players. He brought the best from contemporary, traditional and acoustic blues, as well as gospel and New Orleans. In his words, he only invites blues artists who "live it, breath it, and die it."

Highlights of the festival included singer Dawn Tyler Watson, who sang soulfully to the rhythms and picking of acoustic guitarist Paul Deslauriers. Watson is a singer who pulls the audience in with her passion and plays with their hearts. She is a master vocalist of contemporary blues style. Deslauiers played equally well as an accompanist for Watson and as a solo performer, tearing up his version of Michael Kindred and Neil C. Young's "Cold Shot" on acoustic guitar.

75 year-old singer/harmonicist Wallace Coleman and his band offered a traditional blues style that had the audience screaming for two encores. With over fifty years in the blues business, Coleman knows exactly where to lay the groove with his smooth harmonica playing and his silky blues voice. He carefully chose his band, which backed him up with danceable rhythms that had most of the audience in the large tent out of its seats and grooving at the front of the stage.

Otis Taylor and his band introduced many in the audience to what is described as trance blues. His excellent guitar and electric banjo rifts were backed by the repetitive, trance-inducing sounds of a slow bass. Taylor's calm and rugged demeanor was contrasted by violinist Ann Harris, who seductively danced and smiled her way through the performance, creating an interesting and engaging stage show. Taylor and his band played a unique and enjoyable style of blues that was appreciated by this sophisticated audience.

Cloeren also showed his love for New Orleans music by booking the Crescent City funk band Big Sam's Funky Nation. This quintet of drums, bass, guitar, trombone, and trumpet was stunning in its knowledge of the funk repertoire. While the tunes were mostly original, the band made obvious its appreciation for other funk bands of the genre, with samples of the Funkadelics, Wild Cherry. The Meters, James Brown, and Sly and the Family Stone infused in its music. Sam "Big Sam" Williams played a great trombone, but he was equally good at singing and dancing. His dancing was uninhibited and his personality was infectious, which all added up to an energetic set, bringing the audience to its feet in appreciation. 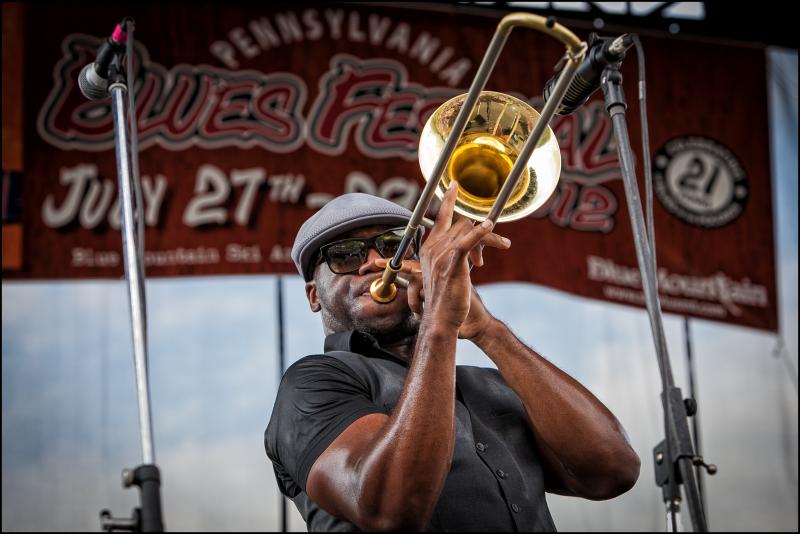 Other groups included Naomi Shelton and The Gospel Queens, opening Sunday morning with a gospel performance, Teeny Tucker, Earl Thomas, Corey Harris, and The Brooks Family. Each group was given two sets at the festival, which kindly gives the audience two chances to hear its favorites, or discover a new group.

For blues fans, or those just investigating the blues genre, the annual Pennsylvania Blues Festival is comfortable place to hear top national acts playing in the scenic Pocono Mountains of Pennsylvania. On-site camping is available, and there are nearby hotels for the less adventurous. Jam sessions are scheduled in the roomy ski lodge until midnight, for those looking for an evening to hang out and play. Excellent food— consisting of many Southern dishes, including a variety of barbecued meats—was available for purchase and added to the blues feel of the festival.

The Pennsylvania Blues Festival is world class event dedicated to the preservation and enjoyment of the blues. As Cloeren emphasizes, "You don't have to be a blues fan to enjoy this music, because this is happy music, upbeat music, and eclectic music." No doubt that, on this summer weekend, the Pennsylvania hills were alive with the sounds of this joyous music form.