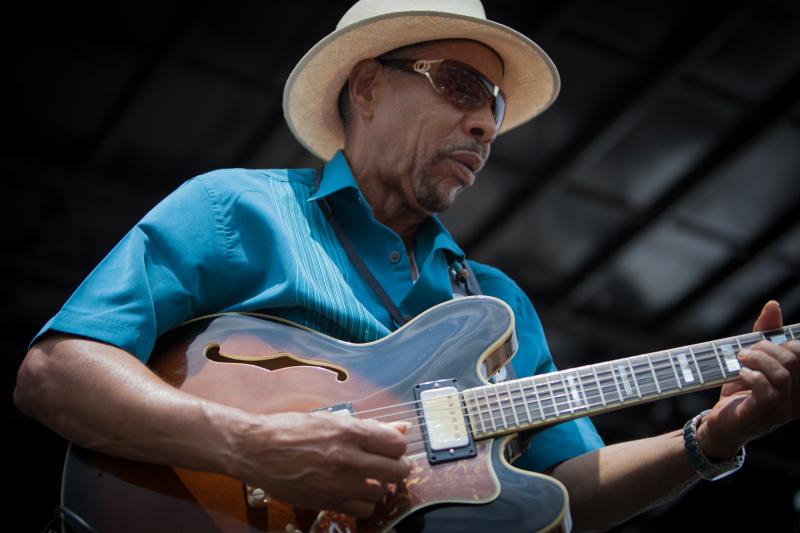 For the past 22 years, veteran festival producer Michael Cloeren has thrown a weekend party in the Pocono mountains, playing host to fifteen of his favorite blues musician friends and their bands and inviting a few thousand avid fans of the genre to pull up a camp chair and join the fun. Or, at least, that's how it feels to attend one of the most comfortable festivals on the east coast.

Held each year at the base of Blue Mountain Ski Resort, the festival features a large outdoor stage and a smaller, more intimate tent stage, with food and crafts lining the path between the two venues. Add the mountain backdrop, a ski lodge with clean bathrooms and a large air-conditioned bar areas for those who want to escape the heat and rain that so often plague summer festivals and you have the makings of an easy-to-attend festival. A camping area, VIP opportunities and late-night indoor jam sessions round out the amenities that also host some of the best blues acts anywhere.

Cloeren became hooked on the blues as a teen and his passion has not waned, as he became friend and supporter of multiple musicians showcased at his festival each year. The Pennsylvania Blues Festival is exceptional in its variety of styles and, over its two decades, has featured its share of traditional old blues as well as gospel and the trance blues of Otis Taylor to the powerful sacred steel music of the Slide Brothers. Whatever the style, Cloeren insist that the music at the festival is "rooted" in the blues. 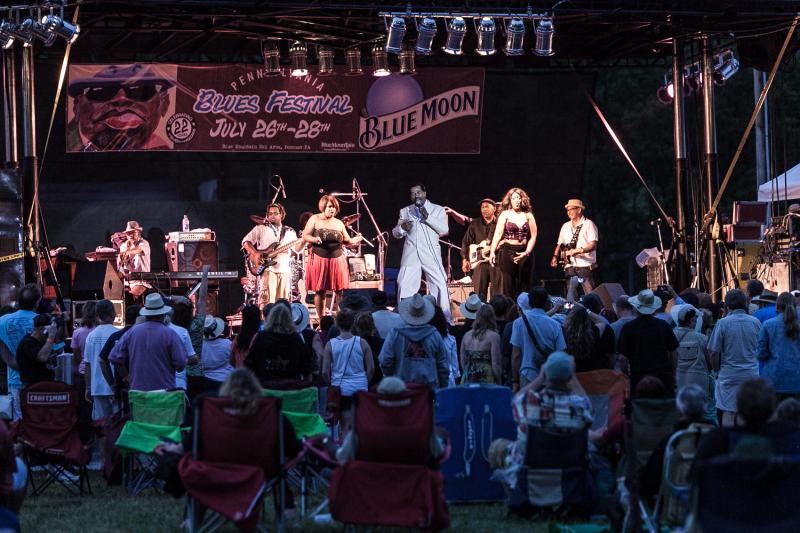 This year's festival was warm with a kind breeze as John Primer opened Saturday with his guitar and harmonica-infused numbers steeped in traditional blues. Youthful and energetic, Primer enthralled the audience with his soulful singing and blues guitar, belying his 68 years. At the end of his festival stage set, Cloeren awarded Primer with a Lifetime Achievement Award for his sixty years in the business, including a stint as guitarist in Muddy Waters' band. His second set at the tent stage gave the audience chance to see his blues licks up close, as he pulled and twisted strings to make the instrument talk to everyone's soul. He left no one in doubt that he is a master of his craft.

In Cloeren's annual tip of the hat to New Orleans music, the Bonerama trombone trio took the stage with its horn-infused, New Orleans-inspired music. The Crescent City was well-represented by the trio of horns masterfully played by Mark Mullins, Craig Kleinman, and Greg Hicks. The trio was supported by Bert Cotton's excellent guitar work and energetic rhythms from drummer Simon Lott and bassist Nori Naraoka. In the more intimate evening tent stage performance, the band continued a New Orleans tradition of teaching the young when it invited fifteen year-old Pennsylvania trombonist Bobby Pollack to the stage to join the group for three songs. Pollack kept up with the trio as he was initiated into the New Orleans music tradition, with his proud father looking on. 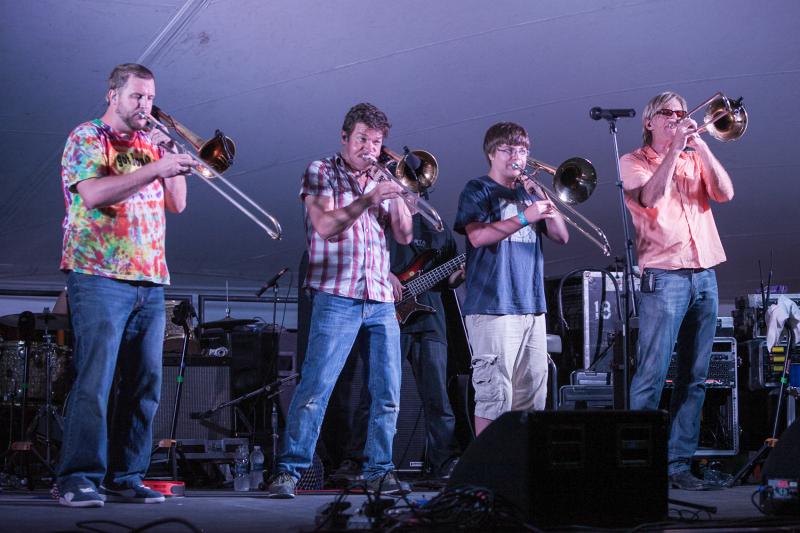 The larger-than-life gospel soul voice of Sister Monica Parker was next, her church-inspired band including saxophonist Von Ambrose and organist Danny Beconcini. It was a call to church as the crowd could be heard responding with a chorus of "That's Right!" and "Sing It, Girl!," as she spoke and sang in preacher style and joyfully played with the audience.

She told the story of one of her tunes that was inspired by an encounter she had with B.B. King. She had just sung with his band, but had not met him. She asked if she could get a photo with him and was told that he does not like to take pictures, but that they would have him autograph one of his publicity photos and make sure she got a copy. Not being satisfied with that, she walked past his security and asked the blues guitar legend if she could take a photo and he responded, "Sure, baby! Just hug me like you love me." She went home and wrote a new tune, "Hug Me Like You Love Me," in honor of the encounter.

With the party now fully started, The Slide Brothers delivered an awe-inspiring performance featuring three slide guitars in the tradition of Sacred Steel. All hailing from the House of God Church in New Jersey, Calvin Cooke, Aubrey Ghent and brothers Darick and Chuck Campbell electrified the crowd with their mastery of this instrument, introduced to the musicians at their church in the 1930s.

Sacred Steel was used to enhance call-and-response praise music by mimicking the human voice in song. Watching the trio of slide players on the stage, it was impossible not to sense that they were having a musical and spiritual conversation as they played off each others' licks. Each man sat comfortably at his guitar, musically talking, arguing, and finishing his band mates' sentences on this most difficult instrument. It was a divine experience as the group took the Pennsylvania hill side to church. The excitement of their Sunday services can only be imagined. 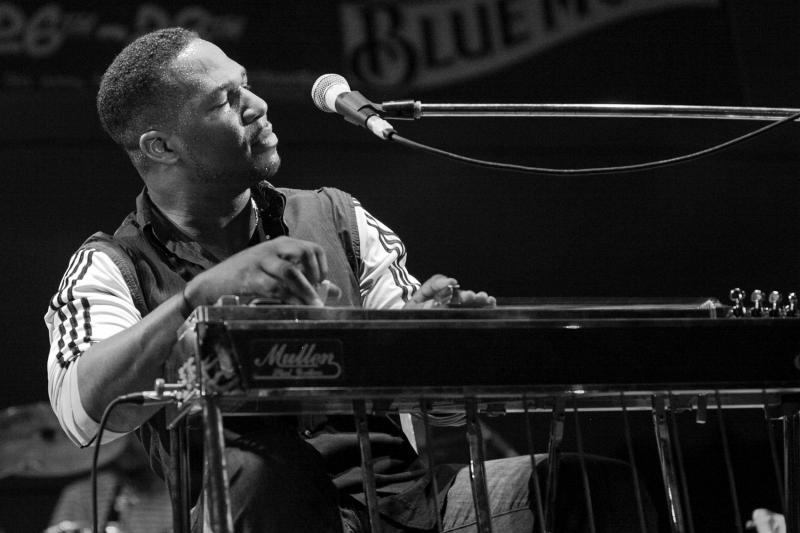 And when it seemed it could not get any more exuberant, the evening finished with Robert Randolph. Randolph is an exciting young slide guitarist and a member of the same New Jersey church as the Slide Brothers, whose members he considers to be his mentors. He takes the style to a frenzied level, playing tunes ranging from a gospel-infused "Get Ready" to Jimi Hendrix's "Foxy Lady." Opening with Hendrix's "Voodoo Child," Randolph started off powerfully, finishing the tune with a note-for-note solo that somehow managed to make the slide guitar sound like Hendrix's Stratocaster. It was a jaw-dropping moment for many of those who witnessed his power and talent.

Randolph is a rising star, with many TV appearances on programs like Conan and Austin City Limits. Randolph is doing for the blues what Trombone Shorty is doing for New Orleans music by making it accessible to younger audiences. In fact, in a brilliant collaboration, Trombone Shorty has backed several Randolph recordings and they often are on the same festival bills. Producer Cloeren says Randolph is what ..."lets me sleep at night, knowing that the blues has a future with artist like him." But the rooted Randolph has clearly not forgotten where he came from, as he brought his Slide Brothers mentors back to the stage to play several numbers. Words cannot describe four slide guitars playing together as they finished the night with a screaming version of Hendrix's "Foxy Lady." This was truly memorable for those who had the pleasure of witnessing this set.

Intermittent rain did not keep fans from enjoying Sunday's lineup, including bass vocalist Alexis P. Suter with a 40-member choir from her Brooklyn church, the soul blues of Johnny Rawls, New Orleans funk from Ivan Neville's Dumpstaphunk, the traditional blues of Ruthie Foster and more. This is a festival that attracts regulars from many states across the northeast and beyond and, with a lineup and setting like this, they can hardly be blamed for making this event a part of their summer vacation.

Every July for the past 22 years, Michael Cloeren has thrown a blues party in the Poconos. The man sure knows how to throw a party.