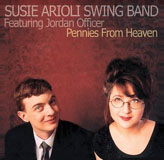 For her second album, Montreal-based singer Susie Arioli has graduated from a smaller label to a major Canadian one, Justin Time. And why not. Arioli has one of the more personable and refreshing vocal styles on today's scene. With impeccable phrasing and timing, an incredible feel for the lyrics all expressed in an engaging vocal fashion, she revives a musical agenda of mostly classic standards peppered with some contemporary material. Jordan Officer once again is with the singer and plays an integral part in the relaxed but vibrant way the music is presented. Moving back and forth between acoustic and electric, Officer has the ability to adjust his guitar styling to the musical concept established for each tune. He opens a plaintive "Pennies from Heaven" with chords straight out of Django Reinhardt. His axe rakes on a Chicago blues timbre for Otis Rush's "Sit Down Baby". Pianist Ralph Sutton shows up for one cut, probably the last time he was in a recording studio prior to his death. He and Officer go at it on a strictly instrumental "Walter's Flat", with the accommodating Officer guitar taking on a Les Paul mien while Sutton does stride. The other members of the Swing Band, Michael Jerome Browne, Solon McDade, Jeff Healey and Colin Bray, perform admirably. But it's Arioli that sells this album. Listen to her subtle, charming musical locution on "He Needs Me" over Officer's guitar making this track another album highlight. Arioli also raps on the snare drum while singing. Asked why, her answer is that she had to find something for her hands to do when she was singing.

Pennies from Heaven; Honeysuckle Rose; Night and Day; Fooling Myself; Jordan's Boogie; Don't Explain; I'll Never Smile Again; Having Fun; Sit Down Baby; Walter's Flat*; He Needs Me; Do Nothing `Til You Hear from Me; No Regrets.