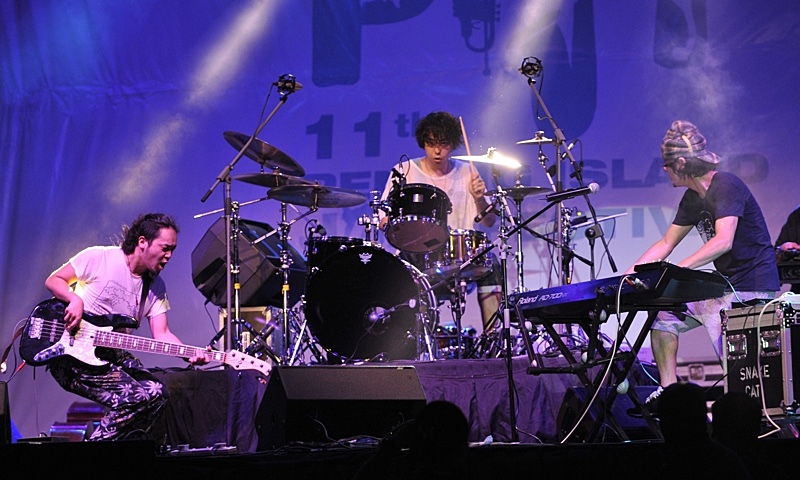 It was business as usual at the Penang Island Jazz Festival 2014, following the tenth anniversary celebrations of the previous year. That milestone was no small feat for Festival Director Paul Augustin, business partner Chin Choo Yeun and their loyal team, in a region where jazz of all stripes—with the notable exception of smooth jazz—occupies the bottom rung of the popular music ladder. Along the way, the PIJF has not only established itself as the longest-running jazz festival in Malaysia but as one of the most internationally renowned jazz festivals in Asia. Now the PIJF embarks on the second decade of its great musical adventure.

Other Asian jazz festivals, sadly, have not proved nearly as durable. There were almost as many ushers as audience members at the one-off Niu's On Silom 1st International Bangkok Jazz Festival in 2009, notwithstanding a program that boasted Chris Potter's Underground, the James Carter Organ Trio, the Gwilym Simcock Trio and Richard Bona. The Bangkok Jazz Festival has lain fallow for four years despite repeated rumors of resuscitation. More recently, the North Sea Hong Kong Jazz Festival folded its hand before the game had even started, due to poor ticket sales. The PIJF may be small-scale, but it has found the formula to succeed where bigger and better bank-rolled festivals have fallen by the wayside.

There's no single element that has positioned the PIJF as a significant event in the Malaysian cultural calendar. Though few are the marquee names that have played the main stage over the years the PIJF is synonymous with good music. Many bands that make it on the Jazz By The Beach main stage have gone on to play at bigger festivals throughout the region and beyond. The PIJF's location in the lush gardens of the Bayview Beach Resort, flanked by sandy beach and the Straits of Malacca on one side and tropical, forest-clad mountain on the other is hard to beat.

The festival has consistently nurtured local talent, establishing exchange programs with other countries that have helped raise the international profile of Malaysian musicians. The Malaysian jazz scene may not have the depth of those in Thailand, Indonesia, China or South Korea but through the PIJF's Creative Malaysia Programme the festival has done its level best to encourage aspiring musicians by providing a performance platform, with several acts gravitating from the small, showcase stages to the main stage over the years. PIJF 2014 was no exception, with fourteen young Malaysian bands playing and former fringe performer Ray Rozells strutting his stuff on the main stage.

In recent editions the PIJF has played host to international jazz festival directors and programmers, resulting in return invitations to festivals, industry forums, trade fares and showcases around the world that have cemented international working relationships. The regional networking of previous years has expanded to Europe, ensuring that the PIJF is abreast of current international trends. Serious, the UK's largest international producer of jazz, world and classical music, the Salford Music Research Centre, the Brisbane International Jazz Festival, the moers festival and the North Sea Jazz Festival were all represented at PIJF 2014.

As Augustin said in an interview with AAJ in 2013, the PIJF is built on a foundation of friendship—the very pillar of both the festival's appeal and of its success. Familiar faces turn up year after year in the audience and in the media folk that come from far and wide. Importantly, it's friends and family that make up the team of volunteers that's such a vital component of the festival's smooth running. All are supporters of the PIJF and together they bring something of a big-family feel to the event.

As the PIJF embarks on its second decade it faces new challenges. Augustin harbors ambitions to grow the festival, which is in line with the Ministry for Tourism's efforts to position Penang as a city of arts and culture. The ball is rolling: a World Music Festival and a Literary Festival have added muscle to the calendar of cultural events in recent years; England's The Guardian newspaper voted Penang as one of the Top Ten Must Visit Destinations in 2014 while Lonely Planet voted Penang the World's Number One Destination for Food. Penang, it seems, is fashionable.

Yet the almost complete lack of poster and flyer advertising for the PIJF 2014 in Penang's World Heritage center of Georgetown—bulging with tourists—or along the city's thoroughfares was strange to say the least. It was also at odds with the PIJF's program notes as penned by the Penang State Minister for Tourism Development and Culture, Danny Law Heng Kiang, who declared the desire to further stimulate Penang's tourism industry. The PIJF may be one of the best jazz festivals in Asia but it also holds the dubious distinction of being one of the least advertised festivals by a host city.

Musically, however, the PIJF 2014 delivered the goods. Its usual cosmopolitan menu, with acts from England, America, Switzerland, Portugal, Germany, Holland, South Korea, Canada, Japan and Malaysia served up a jazz buffet that ran from its traditional origins to its contemporary cutting edge, with a liberal dose of World Music, funk, pop and soul added to the mix.

The first two official days of the festival were fairly low key. Thursday saw the launch of the PIJF Jazz Gallery -a photographic exhibition of the festival's first ten years and a poster exhibition celebrating the musical heritage of Penang from the 1940s to the 1960s. Festival Director Paul Augustin and researcher/curator James Lochhead gave a joint presentation on the city's musical heritage, a long-term project that will see the publication of a lavishly illustrated book on the subject some time in 2015.

Traditionally over the years the PIJF has held a Jazz With a Heart Concert to raise funds for local charitable causes. This year's beneficiary was the Persatuan Kebajikan Shammah(Shammah Home for Abandoned Children). In previous years this evening took the form of a dinner, where large numbers turned out to enjoy a social occasion while several bands played the stage of the Bayview Beach Resort ballroom.

This year the dinner was scrapped with the noble intention of positioning the music center stage as opposed to providing mere background noise. Unfortunately, with the food gone from the evening's menu, Penang society failed to turn up in any sort of numbers and a rather thin crowd watched several bands perform.

First up was the Island Palm Beach Boys, whose brand of Hawaiian music had its heyday in Penang from the 1940s to the 1960s. In one of Augustin's more left-field programming moves the Island Palm Beach Boys had opened the Jazz By The Beach program of the PIJF 2009 where they received a warm reception. Five years on, the walking bass lines, gently chugging ukulele and country-tinged blues were still the order of the day, with singers Kathleen Rodrigues and Edmond Prior sharing vocal duties. Next, the Dutch Swing College Band gave a rousing rendition of traditional Dixieland jazz. The DSCB had first played Penang in 1962, prompting clarinetist and saxophonist Bob Kape—band member since 1966—to remark: "It was such an enormous success they invited us back."

Finally, there was a serious dose of pop-cover nostalgia courtesy of Penang band The Beads. Three of the original four members, Fred Cheah, Kenny Chu and Albert Choo were playing together for the first time in forty five years—without any signs of rust—much to the delight of locals.

The evening was, however, lacking in atmosphere. The bright lights of the ballroom and the school assembly-style seating provided a rather sterile atmosphere in which to listen to music. The organizers might consider jazzing up the event next year. It wouldn't be too difficult to transform the ballroom into a jazz club set-up, with dimmed lighting, bamboo tables and chairs, a few candles and potted palms here and there and a bar with waiter service to create more of a sense of occasion. It would likely be easier then to sell the event and raise more money for a worthy cause.

Prior to Saturday's main stage program there was plenty of activity, beginning with Sunrise@TSG. More people than ever made the effort to reach the Tropical Spice Gardens for 7am where the De Leon Jazz Experience-Acoustrings, acoustic indie duo Ashes and Oak Trees and singer Ray Rozells Unplugged got the day off to a soulful start. When this early morning program was introduced back in PIJF 2012, Augustin felt that there was every chance it would bomb but the healthy numbers in attendance proved that it's becoming increasingly popular.

There were two talks followed by panel discussions either side of lunch and workshops ran from early morning to the middle of the afternoon, covering themes as diverse as the values of cross-cultural music collaboration, the origins of traditional jazz and music innovation through unusual combinations of instruments. Two standout workshops were those by Canadian pianist/singer Laila Biali and bassist Richard Bona.

Biali's versions of Bjork's "Venus as a Boy," Sara McLaughlin's "Ice Cream," Coldplay's "Yellow"—inspired by Chopin's "Raindrop" prelude—and a fresh take on "Autumn Leaves" showcased her facility for captivating arrangements and a harmonic sophistication that rendered each song utterly personal. For Asian jazz musicians, particularly those who interpret more than compose, finding an original form of expression is key to a successful international career. Slavish imitation of the standards is unlikely to open too many doors.

This notion was confirmed by Reiner Michalke—Artistic Director of the moers festival—in his presentation entitled "One Step Ahead: Festival Programming in a Competitive World," when he stated that European festivals would be unlikely to program an Asian jazz band if it was just playing classic American jazz. These words echoed when watching the young Malaysian band The Tett Lim Effect on the fringe stage. Drummer Lim's sextet, with three saxophones in the front line, gave smooth renditions of "Now's The Time," "All the Things You Are," "Moanin'" and "Summertime." Although these young musicians are just starting out, their aspirations as jazz musicians will likely be tied to the extent that they allow their imaginations and curiosity to develop.

Michalke went on to outline the diverse motivations behind running a jazz festival before an open discussion followed with Amy Pearce, Associate Director of Serious (producer of the EGF London Jazz Festival) and Frank Bolder, the Program Manager of North Sea Jazz Festival. All agreed that commercial and artistic considerations usually go hand in glove at most jazz festivals and that there's no such thing as a sure-fire success when it comes to programming. As Pearce said: "You don't always know when you're taking a risk."

The moers festival has been as adventurous as any jazz festival in Europe since it was founded in 1971 by Burkhard Hennen. It has changed its name and several times over the years it has changed location. Musically too, the festival has evolved, though experimental and avant-garde music remain essential components of the four-day festival. Michalke, who took over the festival in 2005 paid tribute to Hennen when he said: "The greatest gift my predecessor gave me was a curious and open-minded audience."