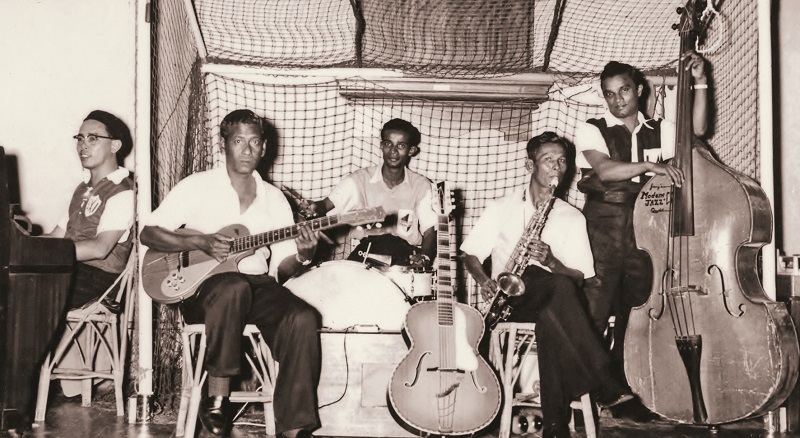 By IAN PATTERSON
November 22, 2017
Sign in to view read count

We’re trying to create awareness. There’s no point in hoarding the music and culture of the past if those in the present aren’t aware of it.
—Paul Augustin, Director of Penang House Of Music

In the heart of downtown Georgetown, Penang, on the top floor of KOMTAR, a typically bustling Malaysian shopping mall, an oasis of calm can be found in Penang House of Music. Calm, but stimulating too, for PHOM is a museum-cum archive celebrating Penang's rich and varied musical heritage, including the island's long-standing, ever-evolving relationship with jazz.

"Something like PHOM has never existed before now in Malaysia, or in this part of the world," says Paul Augustin, co-founder of promotions company Capricorn Connection and Director of the Penang Island Jazz Festival, whose idea the centre was in the first place. "It's the culmination of the Penang Music Heritage Project project we started in 2007."

That initiative began when Augustin and James Lochhead—another long-term advocate of jazz and culture in Penang—curated an exhibition on Penang's musical heritage in Penang State Museum in 2010 and an expanded exhibition in 2013. The two realized, however, that they had only begun to scratch the surface of Penang's musical past. Accordingly, they dedicated considerable time in further research, which resulted in the splendid book Just For The Love Of It: Popular Music in Penang, 1930s-1960s, a must for anyone interested in understanding the Malay, Indian, Chinese and Eurasian cultural roots of Penang.

PHOM is the final piece in the puzzle. "Everything we had wanted to do with the Penang Music Heritage project now focuses on this centre," says Augustin. PHOM is a gallery, a resource/archive centre and a live music venue. What's immediately apparent strolling around PHOM from the instruments on display, the photos and bric-a-brac on the walls, is the diversity of Penang's musical heritage.

Instruments of Malay, Chinese, Indian, Persian, South-East Asian and European origin attest to the incredibly cosmopolitan, multi-cultural nature of Penang from its earliest days as a hub of international commerce.

Jazz too, has had a colourful history in Penang, first gaining popularity as dance music in the mid-1920s with the arrival of gramophones and vinyl. "The theatre was also very, very important," Augustin stresses. "The movies showed the music, the styles, the bands and stars that were coming up."

In spite of the region's unforgiving tropical heat, PHOM has, in just a year since opening its doors, accumulated a sizeable vinyl collection, which includes some of the earliest jazz records to arrive from abroad to Malaysia as well as the earliest jazz recordings by Malaysian artists. "We've found a lot of early jazz," says Augustin with unconcealed delight, "and just recently I found a vinyl recording of Charlie Mariano with the Radio Television Malaysia Kombo. That was in 1967. He was seconded to come coach the RTM orchestra, replacing Herb Pomeroy, who'd been there a couple of months," he explains with enthusiasm.

"We've got ten thousand vinyls and counting," says Augustin. "People are walking in and giving us their old vinyl collections. Some of the stuff comes to us in really good condition from people who took the trouble to keep it nicely. A few thousand we've had to clean up."

The aim is to digitalize all the vinyl so that the music is preserved long after the wax has succumbed to the heat and humidity. "It's taking a long time," admits Augustin "because we can only do it in real time and we've only got one machine that can do it."

Of course, jazz is only one small part of the resource centre, and the ever-growing vinyl collection also reflects the popularity of social dance and ritual music like ronggeng, boria and bangsawan—traditions which gradually dissipated as culture and fashions evolved. Chinese opera, Hollywood and Indian film music, municipal bands and the ever-evolving sound of pop and rock music are likewise well represented in the PHOM's multi-media collection.

One gem that has surfaced during the ongoing building of the resource centre has been a Voice Of America recording of Jimmy Boyle, a brilliant pianist and composer of over three hundred and fifty tunes who was active in jazz and indigenous Malay music from the 1930s to the 1970s. Boyle was admired by Jack Teagarden and Charles Lloyd, both of whom played in Penang in the late 1960s. Another jazz luminary to visit Penang was Albert Mangelsdorff in 1964, on an Asian tour that was documented in Downbeat.

PHOM has amassed numerous newspaper/magazine articles and photogrpahs relating to these and many more concerts by foreign visitors over the years. "We scan all the newspapers and magazines and archive them," explains Augustin. "So far we've documented about ten years of newspaper clippings, mostly about Penang. The resource centre is the heartbeat of the PHM."

PHOM is also an interactive music heritage centre, with listening booths, a photo corner and the extremely popular radio room where visitors can have a go at being a radio DJ. The song you choose to present and announce is yours to download to the device of your choice, as a memento. There's also a cinema and a state of the art Virtual Reality room, where the music of the past comes very much to life.

The Virtual Reality experience was an expensive project to install but Augustin is delighted with the results. "We wanted to give people the experience of listening to Penang music and feeling part of the audience."

The Black Box is PHOM's dedicated performance space. Regular concerts are held here as well as workshops and talks. For Augustin this is an important corner of PHOM. "The live music scene in Penang really died a death in the 1980s with many music venues slowly closing their doors. The scene is better now and the Black Box is another venue. We try to showcase the historic figures as well as the young, up-and-coming talent."

One of the historically important figure in the history of Penang music to appear at the Black Box was eighty-four-year old Ahmad Nawab, a clarinetist/saxophonist and composer of over two thousand songs. "Ahmad's like the Sadao Watanabe of Malaysia," says Augustin. "He spoke about his life in music and played a few songs. It was like a documentary." Such talks and performance become themselves, part of the resource centre and archive. "Whatever we do at PHM," says Augustin, we record and document it."

Augustin is pleased with the public response to PHOM. "The general reception we have got has been amazing. People like the fact that we're not only documenting the music but the periods of time and the changes in clothing, hairstyles and the way that people talk. The change from the acoustic to the electric age. Right up until the 1950s music in Malaysia was acoustic—double bass and ukuleles and so on. When The Shadows, Cliff Richard, Elvis Presley, Bill Haley and the Comets came along it changed everything worldwide. Of course The Beatles and The Rolling Stones later on. It all affected Malaysia too."

The aim of PHOM for Augustin is simple. "We're trying to create awareness. There's no point in hoarding the music and culture of the past if those in the present aren't aware of it." To that extent, PHOM has enjoyed notable successes, with CNN Travel placing PHOM tenth in its Top 25 Places to Visit in Malaysia. "That took us by surprise," says Augustin. "It's a big thing."

Recognition has also come from other quarters, with researchers coming from Japan, Taiwan and Singapore coming to see how PHOM operates and to borrow material for exhibitions. Other visitors have suggested that Augustin and his team should set up similar centres in different parts of Malaysia, or even in other Asian countries. Augustin is flattered by the interest but is also a realist.

"You need to know the history and you need to spend a lot of time doing research. We can advise somebody how to do it. We can point them in the right direction, how to go about it and what to look for."

For Augustin and his team there is more than enough to keep them occupied with PHOM for the time being. The success of the PHOM can be measured not just in terms of the interest and appreciation shown by visitors, but in the huge quantity of Penang music archived and documented thus far.

Important challenges, however, still lie ahead. "It's going well but we only have funds to keep it going until next year," says Augustin. "Beyond that we need financial support from sponsors to move forward faster."

It is to be hoped that PHOM gains the longer-term support it needs to keep on preserving and promoting the rich musical and cultural heritage of Penang, a heritage that continues to gain an international reputation through the Penang Island Jazz Festival, celebrating its fourteenth edition in 2017.

In the meantime, you can be sure that Augustin and his team will carry on sorting through stacks of old vinyl, newspapers, movies and photographs, digitizing and archiving as they go. "We're trying to make people aware," re-emphasizes Augustin.

The PHOM's importance, however, is not just in raising awareness of the past, for understanding the bygone ways of bygone days, as any student of history will tell you, sheds greater light of understanding on the present.