By FRIEDRICH KUNZMANN
July 30, 2019
Sign in to view read count 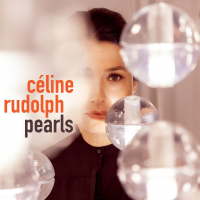 At some point in their career, most vocalists usually make a choice. They decide which language they prefer singing in and what type of music they want to make. Sometimes these things vary from one album to the next, but in most cases a specific style can be traced on a global level over the entire body of work. Not so with Berlin-born and based singer / composer Céline Rudolph. Gliding between the musical cultures of Latin-America, Africa, Europe and the U.S.A, Rudolph tends to incorporate a multitude of different styles in her music, often within a song. She makes this known not only through the music but also through the lyrics, as aptly demonstrated with her playful words in "On the Way": "I write a song that starts en francais—That takes an English detour to rime with amour."

On Pearls Rudolph is joined by Lionel Loueke on guitar, with whom she'd collaborated with on her German Echo prize winning album Obsessions (Obsessions 2017), which saw the two performing an exclusive set of intimate duets. With the addition of Leo Genovese on keys, Burniss Travis on bass and Jamire Williams on drums, Rudolph presents a variety of originals that turn and toss in to all sorts of directions.

The opening title tune has a pop appeal to it, though intricate melodic lines combined with the secretly driven 5/4 groove color it in an avant-garde light. Rudolph skillfully manipulates the tone and timbre of her voice for some wordless vocal passages. Other cuts are more straight-forward and find the band grooving to jazz-pop jams that highlight the vocals and words, such as "On The Way," "C'est un love song" or "Where Shall I Go." At times however the words and mixed-language approach lean towards undermining the music. The opening phrase "I fall mélancolique not only in the fall" of "On the Way" or the repetitive rhyme scheme, based around the endings "oh lêlê," "oh nênê," "oh lolo" and "oh no, no," on "Where Shall I Go" represent light-hearted and playful writing that occasionally distracts from the instrumental part of the songs. Loueke's splendid guitar work on the latter however can't be ignored. His moving from western tinged slide guitar to the octave-pedal layered jam on "Aumbaeleo" is only a small demonstration of what he is capable of. The versatility and unique technique the Beninese guitarist brings to the table triggers an inkling for adventuress in the musicians that surround him, resulting in a flashy, colorful palette.

"Aumbaeleo" finds Rudolph hauntingly hovering over the band with echoing vowels that end in a collective chant. On the more intimately arranged tracks, such as "Be With You" or the experimentally pointillistic exercise "I'm Old Fashioned," the singer scales back the depth to her vocals and demonstrates the husky and beguiling facet to her voice. Each measure on Pearls is carefully wrought and meticulously instrumented, depending on what the composition requires. Her evocative delivery in Portuguese on the ballad "O Silêncio das Estrelas" midway through the record is representative for the amount of soul Rudolph puts into music and voice and a convincing argument for giving this record the chance it deserves. For it is intriguing and accomplished from start to finish.

Pearls; On The Way; La Caravane; Be With You; C'est un Love Song; Where Shall I Go; I'm Old Fashioned; O Silêncio das Estrelas; In Between; Aumbaeleo; Le Vent Du Nord; Song From The In-Between; L'ascenseur pour l'Èquinoxe; Dim Lights.