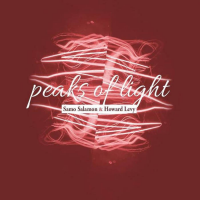 American harmonica player Howard Levy is not only a master of the diatonic harmonica; he is also an eclectic musician who elevates every playing situation he participates in. Slovenian guitarist/composer Samo Salamon is a jazz specialist, but he is also a fearless improviser, as demonstrated in his recent duet project WindS (Klopotec, 2016) with pianist Stefano Battaglia and Planets of Kei (NotTwo Records, 2017), a free improvisation session on which he played only acoustic guitar.

This album presents a program of duets, most of them new Salamon compositions featuring Levy's harmonica. "Devil's Darling" opens the set with brisk acoustic guitar, strumming an odd-metered pattern. Once Levy enters it becomes a harmonica feature, which is a frequent pattern: Salamon spends more playing time as an accompanist than a soloist. "Chaplin Walks" finds Salamon on electric guitar, and Levy takes a turn as accompanist for the guitar solo, which becomes a brief dialog before the theme returns. "Sleepy Burja" revisits this Salamon ballad: the combination of volume pedal swells and harmonica gives a lovely, yearning sound.

The pair present one collective improvisation. "Our Tune" could have been titled "Out Tune," since it has the most harmonically free playing on the album. "That had its moments," Levy comments at the end. Levy's sole compositional contribution is "Riding the Urban Range," which indeed has a vaguely Western (as in the American frontier) tone. "The Harmonica Suite" opens with a waltz, which finds space for an extended unaccompanied guitar solo. Fans of Salamon's guitar playing will enjoy "Freeze," which closes the album and includes a bit of unaccompanied electric guitar.

Peaks of Light stands as a highlight in Samo Salamon's prolific recording career. Howard Levy may not be an obvious choice for a duet partner, but the sparkling results speak for themselves. Recommended even if you think you do not like the harmonica.