By CLIFFORD ALLEN
June 3, 2009
Sign in to view read count 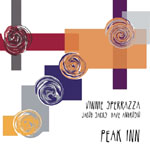 The piano trio is a medium that became immensely popular with Bill Evans' meteoric rise on the international scene in the '50s and has remained an astonishingly equilateral creative outlet for an extraordinary array of harmonic and rhythmic complexity. However, there aren't a lot of groups taking the chances available to them, instead mining the standard fake book or the popular canon in either a neo-romantic or wholly discordant manner. Peak Inn joins Brooklyn-based drummer Vinnie Sperrazza with regular sparring partners, pianist Jacob Sacks (they work together in altoist Matt Blostein's group) and bassist Dave Ambrosio, on four standards, Sperrazza's tune "Hyde" and six collective improvisations. The set teeters between dissonant, impulsive freedom and a fresh, lyrical take on the "book"—albeit with the former directly informing the latter.

On "All Last Night," Sacks' insistent rumbling, arcing out from lower to midrange and tumbling back again, is needled by simple pizzicato figures and an easing surge from Sperrazza's toms. A grubby run gets immediate ride support and Ambrosio starts to shove before the group falls into silence. That run is a foreshadowing of Powell's "Bouncing with Bud" nary a minute later, Sacks trying to cram all his Dave Burrell/Jaki Byard (at his outset) licks into a few bars, combined with agitated, dry percussion and woody sketches. Two minutes and this foray into Bud is done, though one does get a sense of Sperrazza's approach to time, which rests on implied repetition (simple shifts in tone and density within a narrow area). Playing freely on "Our Enemy is Dangerous and Wiley," angular walks come in and out of focus, alternately didactic and shadowy. Wayne Shorter's "Fee Fi Fo Fum" is teased, chewed around and flirted with in a way that recalls the trio of Paul Bley, Steve Swallow and Barry Altschul on Closer (ESP, 1965). Similarly, the tunes here are brief, the longest clocking in just over five minutes and many pieces evaporating rather than stretching out. And there's the rub—longer and equally kaleidoscopic improvisations on familiar tunes are surely within the range of these players. The short running times only serve to whet the appetites of those already apprised of the trio's capabilities.