By EYAL HAREUVENI
November 19, 2010
Sign in to view read count 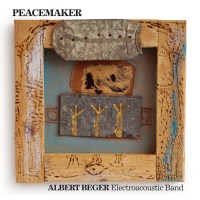 Peacemaker, from Albert Beger, marks a new beginning for the innovative Israeli saxophonist. Beger introduces a new quintet that adds, for the first time, live electronics to his fiery-spirited palette of sounds, and a new approach to composition and playing that stresses thematic structure. He is also recording for a new local label that is identified with alternative music.

Like on his previous Big Mother (Jazzear, 2008), which dealt with the damage that humans are inflicting upon earth, Peacemaker, is a concept album. Beger focuses on an introspective journey to the self, and aims for a profound, compassionate and peaceful state of mind, in order to make a bigger change in the surroundings. Unlike Big Mother, the thematic structure of Peascemaker reveals references to early seventies prog-rock concept albums, mainly in its dramatic development, but in a much more humble manner than the pompous endeavors of many of those bands.

Throughout the six-part suite, Beger attempts to sketch his path amid raging events and sounds, to find the right way amid all the obstructions, confusion and harassment of a very intense reality—quite often a violent and a highly demanding one. His sax playing, both on soprano and tenor, radiates a clear inner self that is determined to get over melancholy and sadness and to fully realize himself as a better person, one that is willing to make a difference in his community.

This spiritual journey is reflected in the music. Avi Elbaz on live electronics and Ido Bukelman, on often distorted, howling guitars, symbolize the inevitable frictions in life, while bassist Assaf Hakimi and drummer/percussionist Dan Benedikt focus on setting this journey on solid rhythmic ground. Beger is indeed the peacemaker that binds these conflicting elements into a greater whole with his passionate and assured playing, and there is no doubt in his leadership and vision—both musical and spiritual.

The most arresting piece is "Nigun," where Jewish prayers vocals are sampled and transformed into buzzing, noisy sounds from which Beger navigates the quintet into a melody that begins as a leisurely klezmer-ish dance, but soon turns into a much more intense and dense search for a deeper sound, but never loses the connection to roots of the piece, or Beger's culture and beliefs.