By MARTIN GLADU
September 14, 2007
Sign in to view read count 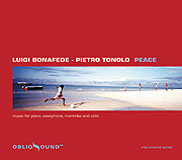 On a sunbathed, at low tide beach above a vast blue sky, fixed in motion, a kid kicks a soccer ball as others await, still in the background. The scene, which graces the cover of Luigi Bonafede's Peace, translates to perfection the duality between movement and stillness in the pianist's music.

Here, pensive, rubato ballads are contrasted with upbeat tracks and facile chanters. Folksy melodies and swaying harmonies (with a propensity for the ad nauseam dual-polychords-over-the-same-pedal-note progression) converge into image-laden vistas both attractive and pleasant. That said, beneath the slick presentation, one finds a somewhat thin/primary compositional depth (that occasional borrowings from a more modern/advanced factory does somehow attenuate) mainly in thematic construction, but sometimes in overall harmonic design as well. In this context, Pietro Tonolo's supple soprano saxophone proves to be an excellent addition (he switches to tenor on the closer, "Distacco ).

Despite its brevity, "Endurance" is a highlight. Its sunny motif, played over yet another of the aforementioned "paired polychords swayer," is partially obscured later in the form by imaginative modulations.

A beautiful ballad with a rangy yet understated head, the gently rolling 7/4 feel of "Quiet" is tastefully spiced up by Tonolo's spiky solo. The unconventional arc of "Temporary" has a clean and jerked climax early in its form on a stratospheric, held Bb note followed by a shimmering piano solo that settles in nicely into the ending section.

Adding variety, the bustling and festive "Living In The City" is reminiscent of torrid sambas heard during Rio De Janeiro's carnivalesque processions. As guest Andrea Dulbecco's galloping marimba work garners attention, a saxophone solo would have generated a welcomed build-up on the too-brief tune. Conversely, to better serve its intrinsic preludial function and feel, the seven-minute "Ricercare" could have been shortened, making way for expanded soloing on stronger (and harmonically busier) compositions such as "Living In The City."

Nothwithstanding some minor redundant elements, the disc will assuredly enthrall many listeners in search of accessible, nuanced and moody atmospheres.