By DAN MCCLENAGHAN
December 31, 2013
Sign in to view read count 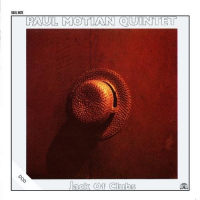 As a drummer, Paul Motian (1931-2011) came to an early fame from his association with Bill Evans. It was the pianist's 1961 Riverside Records trio albums Waltz for Debby and Sunday at the Village Vanguard that did the trick, shifting the way of the piano trio into the direction of democracy and intricate interplay, also launching Motian's career as a much coveted sideman, with pianists Paul Bley and Keith Jarrett, saxophonist Charles Lloyd and bassist Charlie Haden—a list that just scratches the surface. He was, until his passing in 2011, a prolific sideman.

As a bandleader, however, Motian didn't roll into motion until 1972, when he recorded Conception Vessel for ECM Records, released the following year. It was clear from the start, beginning with this subtle, subdued—and odd—album, that Motian was an artist with a highly original voice and vision, a composer seemingly influenced by no one. Between 1975 and '85, Motian went on to release five more albums for ECM, each one better and more cleanly conceived than its predecessor.

After this early stint at ECM, Motian began, in 1988, to record a series of masterful discs (in some cases masterpieces, though not generally acknowledged as such) for JMT (later reformed as Winter & Winter, which would reissue all of Motian's JMT dates, from 1988's Monk in Motian to 1995's At the Village Vanguard). During the latter part of his first tenure at ECM, and before the JMT recordings, Motian hooked up with Italy's Soul Note Records, creating five consistently excellent records that stand as the most overlooked offerings in his extensive discography.

Which brings us to Jack of Clubs (Soul Note, 1984), the drummer/band leader's second Soul Note outing.

A more focused artistic vision than Motian's would be hard to find. He took a quintet into the studio for Jack of Clubs, and built on an otherworldly and often diaphanous sound of the same lineup used on his Soul Note debut, Story of Maryam (1983), teaming saxophonists Jim Pepper and Joe Lovano with guitarist Bill Frisell and bassist Ed Schuller, a group that blew a dreamy, alien soundscape which slipped, at times, into red hot two-saxophone bebop and beyond.

The disc opens with the title tune. Frisell's playing is not readily identifiable as a guitar as it paints a glimmering metallic background for two wandering saxophones. Schuller steps out for a bowed solo accompanied by percussive guitar notes. Motian's bells and soft snare drum accents give way to Lovano's beautiful tenor sax rumination, which leads into Pepper's bird-like soprano saxophone reverie; the ensemble then regroups, going for a minor free jazz calamity that gels back into the tune's pensive melodic theme.

Motian's music has a childlike quality to it; it sounds like musicians at play, with a prevailing continuity toward simplicity. "Cathedral Song" sounds like a tune found in nature. Frisell is, again, key to the music's personality with his sustained, luminescent, neon single-note phrases. The two saxophones blow a unison groove in what sounds like the soundtrack to a a fairy tale.

The atmospherics of the first two tunes give way to something akin to bebop on "Split Decision." Lovano's tenor burns hot lines into Frisell's sheet metal shimmers, as Motian, listened to out of context with the surrounding music, sounds like a rank a novice plying around on the drum kit. Inside the music, he seems a genius of controlled chaos: Keeping time? Playing with time? Unconcerned with time? Driving hard ahead with his own concept of time? Who knows, but he holds the scattered voices together, in a free form and sublimely original way of making beautiful music.

"Split Decision" finds Frisell laying down the time tightly with a repeated riff; the saxophones blow subliminally, the marriage of the guitar's repetition with the eerie reeds suggesting a dream of a train trip into a cold, fog-shrouded, surreal and foreign land.

Jack of Clubs stands as one of the late Paul Motian's overlooked jewels, one that blends freedom and beauty in a distinctive and enchanting way.