Paul Morley: The Age of Bowie

By NENAD GEORGIEVSKI
December 25, 2016
Sign in to view read count 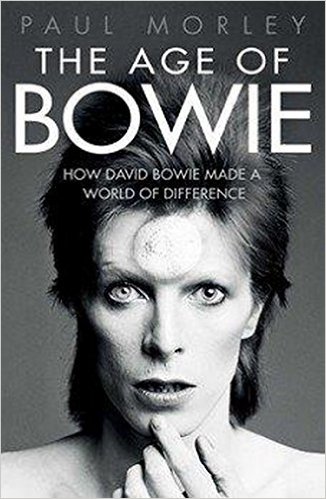 The enormous grief and sadness that outpoured at the unexpected death of singer David Bowie by fans and supporters worldwide were immediate and sincere. As soon as the shocking news broke on the 11th of January 2016, fans paid their homage to this artist who not only pushed boundaries but who also shaped and embodied the times we live in. What started with discussions, excitement, and puzzlement about Blackstar soon turned into eulogies. It felt personal. His death, unfortunately, set the tone of what was to come for the rest of the year.

Brilliant, ever-evolving, forward thinking and innovative, Bowie was a fascinating artist who for decades kept the world spellbound with his music, appearance and mystique. These days, these words such as "creative," "genius," "brilliant" or "forward-thinking" get tossed around without any measure, but these words are only a starting point for defining or describing a man who embraced so many changes of style, characters, musical directions, blazed trails and gave to generations of fans the soundtrack to their lives.

When an artist's achievement is as complex as Bowie's the trying to understand, assess, and analyze his legacy and achievements is a Herculean task. Many books have been written about Bowie throughout the years and most of them have failed at the task of writing a decent biography of this enigma of a character because they never questioned his motives, never tried to grasp the things he was inspired by, have rarely described the times and the different contexts his music was happening or the characters he was inhabiting. By a rule, most music biographies are shallow sketches full of salacious rumors, sex, drugs and rock and roll, and scandalous behavior in enormous quantities. Those are celebrity biographies. Most of the books on the subject of Bowie rarely glimpse behind the scenes of what has made his music so attractive, so intriguing, so modern and so appealing.

In his book The Age of Bowie music journalist, writer, and producer, Paul Morley not only provides a portrait of a musician who refused to stay the same but also provides a cultural history of the times when his music and art were created. The Age of Bowie is many things at once and often they would overlap or collide into contrast or would flow nice and easy. Probably these are the words and ironies that would be used to describe Bowie himself. Morley is a master painter with words. Some writers are architects and they carefully strategize how they will use the words. They use their word sparingly. Others like Morley are master painters and his writing is an absolute outpouring of words and he uses them to splash colors and vivid descriptions of different stations in Bowie's life. His high-octane writing is at the same time intimate, revelatory, mournful, explosive as he immerses himself in the life and work of this ever changing artist.

Bowie's life is given a vivid color and depth as Morley deftly interweaves his illustrious career with things that interest and excite him. Morley is firstly a fan and he writes like a fan. That is why he tries to describe many complex things that are contradictory by nature and even tries to reconcile opposing views. For a start, his plethora of colorful descriptions and opinions leave him at the very start i.e. that the myth of Bowie and the real character and his overwhelming influence are impenetrable and unfathomable. The narrative is abundant in detail. But that doesn't leave him lost for words when he travels from a chapter to a chapter in Bowie's life starting from his family background, early childhood, through a young Mod vainly trying to break into the '60s pop scene.

What other writers failed to see was this restless and sensitive spirit who needed to seek all life's opportunities and attractions in order to find fulfillment. His need to move on has been paramount despite the fact those changes were abrupt and hurtful. Having been brought in suburbia, with its fixed values and fixed stillness, Bowie desperately needed to escape from there in order to allow his imagination to flow freely. Change has been his lifeblood and he had to explore many things, from friends and various strands of music to gurus and mentors. He had to experiment and explore from mime to music and acting. He explored each one passion fervently with a boundless energy and enthusiasm.

In those pre-Ziggy days he was a penniless star that was waiting to be born, but then came the first of many changes, sparked as much by his restless, active mind as by the need of a commercial success. After years of flops and dead end streets in the music business, Bowie finally scored his first hit with "Space Oddity" in 1969 but he still wasn't satisfied. It was around that time that he embraced the underground rock sounds that came from New York and Detroit. Under the influence of Lou Reed's Velvet Underground and Iggy Pop and the Stooges, he blasted through the '70s with a series of innovative albums full of great concepts personified through intriguing characters.

No matter how absorbing a lot of Bowie's later output was the '70s were his signature decade. That is why an enormous amount of this book is centered on this decade only. These were his golden years and success did not stop coming even when he deliberately killed his most famous character Ziggy Stardust. But Bowie went into more drastic changes in the years ahead and he constantly strained the patience and the loyalty of fans and music critics. His music found itself in the furor of controversy about his glittering image and androgynous looks.The critic's wrath was aroused by his inconsistencies and contradictions. He shamelessly switched opinions and attitudes towards sex, politics, background, influences, people. Later he would admit that he said these things in the interest of publicity and promotion. Bowie's life was full of ironies and contradictories.

Morley's approach is personal in every sense but it is inconsistent. By his own admission, he wrote this book in a matter of 3 months. While some parts are highly enjoyable when he acts as a museum curator and leads people interested in Bowie's life from a gallery to gallery, from song to song, or character to character, the book suffers from unusual u-turns, inconsistent chapters. The book does a great job of throwing light on Bowie's career in the '70s, but it seems that his interest in other chapters of his illustrious career did not receive the same treatment. When approaching as a fan, Morley overlooks Bowie's most critically slammed period of his career—the '80s. Even though the first half of the '80s remains the creatively insatiable and wandering artist's commercial high point it received enormous and intense amount of criticism. But Morley is a fan and finds good in the bad.

Bowie's changes and contradictions continued onward in the two decades to come. He would form and then quit bands, he changed record labels and he picked up the pace with the experimentation in the '90s when he soaked up the electronic dance scenes and industrial music.

Morley's book gets close and personal with Bowie. The book is an attempt for him as any other fan to marshal his disbelief and sadness. Bowie and his ideas, thoughts, and emotions are central to this story no matter how contradictory all they may seem. But what hinders this book from being the best book about Bowie are the various inconsistencies. The lack of an editor is evident or someone who could have tamed the wild prose at certain places or someone who could have helped Morley achieve a sense of direction and purpose at other points. Some chapters about the David Bowie Is could have been arrived at with the use of a different strategy. Bowie's final chapter with Blackstar could have received more attention. In the forthcoming months after his passing, Bowie left enough signposts and puzzles in his lyrics, videos, even the album cover to keep fans investigating and searching without end. It was only in the aftermath of the event that the people understood the enormity of the parting gift that Blackstar is and its impact on the year to come. This is the final chapter that people like Morley should provide clues and directions for.

Nevertheless, The Age of Bowie is a tour through the life of a brilliant magician whose idiosyncratic career, creative output and public life have morphed into of the magical moments in pop music both in the XX and XXI century.