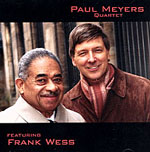 Guitarist Paul Meyers's list of credits reads like a Who's Who in Jazz: a versatile and elegant player who is much in demand, he tours and teaches and has led or co-led ten CDs. Yet for some reason, prior to this there were no Meyers reviews among the 23,000 that are archived at AllAboutJazz.com. This is unfortunate, since Meyers is clearly one of the best guitarists and composers around, a fact which is immediately evident on the CD, Paul Meyers Quartet Featuring Frank Wess

The legendary Wess contributes both tenor and flute to the session, demonstrating with every lick why he became an NEA Jazz Master in 2007. The other talented personnel are bassist Martin Wind, drummer Tony Jefferson, and vocalist Andy Bey, whose version of "Lazy Afternoon" is so atmospheric that it's practically visual. There's a nice balance here between standards and originals, with two fine Meyers compositions and one by Wess helping to create what Meyers describes as "a fun, simple blowing session." While I might choose "uncluttered" over "simple" we definitely agree on the "fun" part, since this is a swinging excursion from beginning to end. What makes the CD especially fresh and spontaneous is the fact that the four musicians never rehearsed this material together before recording it.

Highlights abound, including: Wess's sly "Menage a Bleu," rollicking versions of "Just One of Those Things" and "One for Miss D," the soulful Brazilian sway of "In the Wee Small Hours of the Morning," Wind's pitch-perfect, propulsive walking on "Blue Lantern" and the tasty explorations of relatively lesser-known Strayhorn ("Snibor") and Gershwin ("Who Cares?"). Meyers is impressive throughout, playing with class and eloquence and demonstrating, once again, that it's the choices that mark a great player, not just the technique. Although the CD could use a snappier title, its music engages the listener from beginning to end, and will surely inspire an interest in Meyers's performances as well as the rest of his growing discography. (Note: CD available only on artist website.)

Snibor; Blue Lantern; In the Wee Small Hours of the Morning; One for Miss D; Lazy Afternoon; Menage a Bleu; Just One of Those Things; My One and Only Love; Who Cares?; I Cover the Waterfront.