By JACK BOWERS
September 18, 2018
Sign in to view read count 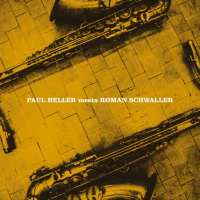 Granted, Paul Heller meeting Roman Schwaller isn't such a big deal here in the States. It is, however, quite a big deal in Germany and western Europe as a whole where Heller and Schwaller are among the reigning monarchs of the tenor saxophone, akin to such American twosomes as Ammons / Gordon, Sims / Cohn or, more recently, Harry Allen / Scott Hamilton, among others. Setting aside the country of origin, this is powerful and perceptive post-bop blowing at its very best.

While Heller and Schwaller clearly hail from the same school of buoyant and irrepressible swing, there is enough difference in their inbred styles to keep matters interesting. When they share the front line, a booklet note discloses which of them is soloing on which channel, left or right. Each of the tenors has a ballad feature: Schwaller, Thelonious Monk's "Ruby My Dear," Heller his own "Ballad for Griff" (dedicated to the late Johnny Griffin who wrote the following number, "You've Never Been There"). The brief finale, "The Tags I and II," is concert-ending riff composed by Heller with no solos on which Heller overdubs two additional tenor parts.

The tenors make their mind-set and purpose explicit on Heller's fast-paced opener, "Romanshorn," on which everyone wails in the finest Prestige / Blue note tradition. Schwaller's easygoing "Some Changes in Life" is followed by another cooker by Schwaller, "Love Someone You Like," which surely must be based on "Like Someone in Love," even though the disguise is exemplary. The same is true of Griffin's "Been There," based on another standard whose name is at the tip of the tongue but must remain there for now. A Latin beat underscores Heller's tasteful "United," which precedes his clever "Quotation Blues," whose melody consists of brief phrases from at least four jazz standards.

As this is a quintet date, a word must be said about the supporting cast: pianist Martin Sasse, bassist Thomas Stabenow and drummer Niklas Walter, and that word is superb. The consonance and time-keeping are spot-on, and Sasse is a splendid soloist as well. If you are partial to tenor saxophonists who swing freely and often, you'll be immensely pleased when Paul Heller Meets Roman Schwaller. Aside from the album's forty-four minute playing time, an unblemished alliance.

Romanshorn; Some Changes in Life; Love Someone You Like; Ballad Medley: Ruby My Dear / Ballad for Griff; You’ve Never Been There; United; Quotation Blues; The Tags I & II.