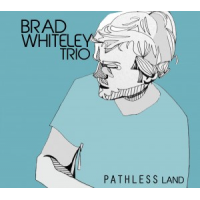 Pathless Land doesn't live up to its title. The name of this album suggests music that's dense and sonically impassable, but that's the antithesis of what actually awaits; instead of unnavigable constructs, pianist/organist Brad Whiteley delivers music that's easy and enjoyable to traverse.

Whiteley's built his reputation as an accompanist and music director, working with artists as diverse as witty pop songstress Regina Spektor, Broadway singer Jeri Sager, and opera-to-cabaret cross-over vocalist Sylvia McNair. On the surface, Pathless Land has little-to-nothing to do with his skills in that area, but digging a little deeper reveals an important truth: Whiteley's ability to hone in on an idea and trim away excess, which was likely developed and sharpened while working with vocalists, guides and informs this work.

Much of what you'd expect on a small group organ-and-piano album is here. Shuffling scenarios ("Winsome Excursion"), reflective music ("Erika's Song"), funky fare ("Bass Instincts"), a tweaked version of a classic ("Come Rain Or Come Shine"), and straight eighth groove numbers ("Nostalgiastic") all share living space. Some of this material is simply about settling into a certain headspace and riding things out, but a few numbers buck that trend, focusing in on empathy and interplay ("Suite: Resolve" and "Pathless Land").

The only number on the program that doesn't measure up is "Suite: Contemplation." Every other piece has been molded into shape, but this number feels half-formed and out of place; it's also the only piece with wordless vocals, further separating itself from the pack.

The music on this album may not line up with the name, but most everything else is expertly balanced and aligned on Pathless Land.