By BUDD KOPMAN
October 2, 2005
Sign in to view read count 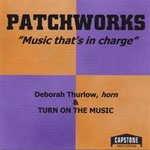 Deborah Thurlow is the founder of Turn on the Music, which is her core quartet of French horn, violin, electric guitar, and electric bass, along with electronic processors for the acoustic instruments and computers to generate electronic sounds. Performances can also include guest players, here on theremin, ney flute, soprano sax, and piano, in various configurations. The stated purpose of the group is "to expand the aesthetic of contemporary improvisation by using a hint of jazz and rock influences, to have new chamber music composed, and to create new and interesting timbres and textures through the use of processed and acoustic techniques.

Each piece has a different compositional esthetic or methodology which can include more or less improvisational freedom for the performers, and also different amounts of "synthetic sounds. While the notes are helpful in getting a better idea of what is going on and why, they are actually not needed to enjoy the music. If music is organized sound in time, then this is music, although it stretches the boundaries quite a bit. There are discrete pitches, and even some tonality in the form of a root note, if not a key. Development happens most often through changes in texture, and there is very little feeling of a pulse. Themes or motives, if they appear at all, are most often played by Thurlow on processed horn. Sonic allusions are also mostly nonexistent, except for the theremin, which seems to be linked (at least to me) to science fiction, and the sound of "Mellow Evening, which is distinctly Indian.

The effort, therefore, for the listener is to let the music happen and listen as the overall effect of the proceedings changes. Withholding preconceptions might be the most difficult thing, but once done, the music is quite moving and engrossing. Sound as sound, regardless of how it is produced (that is, from a "pure instrument, a processed instrument, or a computer), becomes the organizing principle, and experiencing how different sounds with varying degrees of familiarity interact to produce an aural atmosphere that shimmers, expands, and almost changes color while it envelopes you becomes an end in itself. To be sure, this is different emotional and intellectual territory than most jazz, or even most music for that matter, but the live audiences present for these performances applauded appreciatively.

There is one piece that can be described a bit more deeply, and that is "Mellow Evening by Kali Fasteau. Built from a raga that exists in both northern and southern India, it is traditionally beautiful, and very much evokes the feeling of calm serenity that Fasteau mentions in the liner notes. The music has much more of a feeling of being played by a "band, in that there is less electronics and no computer present as Fasteau demonstrates her ability to directly link her spirit with her playing. It creates a delightful and soothing ending to the disc.

Thurlow is clearly a master of this area of musical composition and performance, attracting talented composers and performers into the orbit of Turn on the Music.