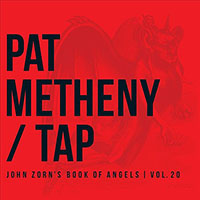 It's difficult to know what is most surprising about Tap: John Zorn's Book of Angels | Vol. 20. It's the first collaboration between guitarist Pat Metheny and saxophonist/composer/Tzadik label head John Zorn, two musicians who, at least on the surface, couldn't be more different. Of course, those who look beyond Metheny's more listener-friendly Pat Metheny to recordings like the searing Zero Tolerance for Silence (Geffen, 1994), his particularly stellar collaboration with saxophonist Ornette Coleman, Song X (Geffen, 1985, reissued Nonesuch, 2005), or his explorations into the outer realms of improvisation with guitarist Derek Bailey on The Sign of 4 (Knitting Factory, 1997), know that there's a lot more depth and exploratory élan to the guitarist who has broken all records for Grammy Award wins (currently at 20).

But what Metheny has done with Zorn's largely sketch-like material from the saxophonist's Jewish music-inspired Masada Songbook—the first book of 200 songs realized largely by the saxophonist with his flagship Masada quartet that also featured drummer Joey Baron and then up-and-coming trumpeter Dave Douglas, but the second book of 300 tunes now in its 20th volume, with past participants including keyboardists Jamie Saft and Uri Caine, jam band progenitors Medeski Martin & Wood, guitarist Marc Ribot and saxophonist Joe Lovano—is turn this music into a suite of half a dozen cinematic pieces, some of truly epic proportions. Still, when taken in the context of Metheny's achievements over the past several years with more complex music like PMG's The Way Up (Nonesuch, 2005) and this year's The Orchestrion Project (Nonesuch, 2013)—the culmination, so far (but, clearly, by no means the end), of his work with his mind-bending 21st century conglomeration of solenoid and pneumatic-driven instruments, the Orchestrion—Tap should, perhaps, really come as no surprise at all.

Still, surprise it does. From the opening left-right panned acoustic guitars of "Mastema" that, in 11/8, set the stage for everything from sitar to reverse-attack electric guitars, kicking into even higher gear with Antonio Sanchez's first appearance—the guitarist's only constant companion on the record and another surprise, Metheny's longtime drummer of choice playing with uncharacteristically full-throttle, balls-out, rock-inflected energy—this is music that may sound little like anything he's done before, but is equally impossible to imagine coming from anyone but Metheny.

Metheny has always been methodical about the introduction of new sounds, new techniques and new approaches to his music. In his earliest days, on albums like American Garage (ECM, 1980) and singer/songwriter Joni Mitchell's career-defining live album Shadows and Light (Asylum, 1980), he seemed incapable of bending a note with real cred; 33 years later, he still bends notes like no other but has, in the intervening years, on albums like The Road to You (Geffen, 1993, reissued Nonesuch, 2006) and Imaginary Day (Warner Bros., 1997), finally found a way to do so that not only speaks of real truth, but is as distinctive as the grittily overdriven electric tone that he's come to define as his own. Other guitarists use factory presets; Metheny creates them.

There is, of course, plenty of the intrinsic lyricism that's been a Metheny signature from his earliest days with vibraphonist Gary Burton, but employed here with the broadest palette he's ever used on what is, Sanchez excepted, a solo recording. In addition to various guitars, electronics and the Orchestrion, Metheny plays piano, keyboards, bandoneon, orchestral bells, tiple...even a little flugelhorn. The music ranges from the gently acoustic "Albim"—Sanchez proving himself as impressive with texture as he is with time, even as it reflects some of Metheny's more contemporary classical concerns—to the overtly middle eastern-inflections of "Tharsis," where a knotty opening section of contrapuntal complexity leads to a tension-releasing middle section of orchestral proportions, Metheny layering his horn-like guitar synth before turning back to the opening section, this time at an even brighter tempo and building to a breathtakingly whirling dervish of a climax.

The theme-heavy but sonically unpredictable "Sariel" sounds like something from an Ennio Morricone score filtered through a jazz-colored prism, while "Phanuel" incorporates curious sonics into a darker interior, but it's "Hurmiz" that may provide the greatest sign of just how far Metheny is willing to go in pursuit of whatever muse grabs hold at any given moment. Some of the freest music that Metheny's ever done under his own name, and with the erstwhile guitarist focusing almost exclusively on piano for something closer to Cecil Taylor than Lyle Mays, it's perhaps most surprising in its position as album-closer.

Freed from the need to build something out of nothing, this time Metheny starts with Zorn's thematic sketches. But what he does over the course of Tap's 51 minutes is something that's at once pure Metheny while simultaneously sounding like nothing Metheny fans have ever heard before. The work of an artist who is doing anything but resting on his considerable laurels and accomplishments, Tap: John Zorn's Book of Angels | Vol. 20 is, instead, proof positive of Metheny's ongoing efforts to push personal envelopes of sound and structure, and logic and liberation, on what may be his most diverse album yet. That Metheny can continue to do so, as he approaches 60 in 2014, may paradoxically be both the guitarist's greatest surprise and his most completely anticipated move of all.