An emphatic statement of The Pat Metheny Group's evolution--a superb 93-minute live declaration of the band's most powerful recording of the '90s. 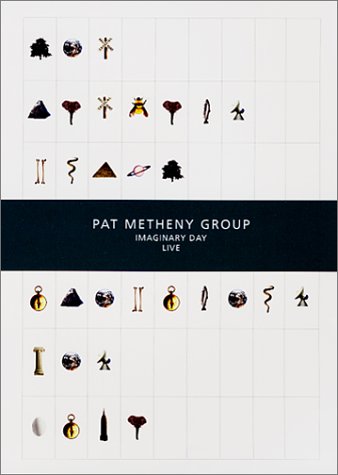 Imaginary Day Live represents an emphatic statement of The Pat Metheny Group's compositional and performance evolution—a superb 93-minute live declaration of the band's most powerful recording of the '90s.

This Digital Video Disc (DVD), released in 2001, is a bookmark of the band's creatively titanic 1997 album, Imaginary Day. All but three tracks come from the Grammy Award winning record in a wonderfully deliberate and dramatic sequencing of material that ranges from the surreal introduction of "Into the Dream" (played on the 42-string Pikasso guitar) to the rock and heavy metal crescendo of "The Roots of Coincidence." In between, Metheny and the group continue to explore their roots in jazz while, at other times, blurring all lines of distinction enough to technically master Middle Eastern influences (on "Heat of the Day") and the sedation of the simple six string acoustic guitar (on "Message To A Friend"). The music, in its totality, makes a statement on where The Pat Metheny Group found itself creatively at the time.

"...We really planned the record from the ground up as a particular thing that would address a pretty specific musical goal that we had in mind," says Metheny. That shows. This collection of songs holds more structure than we've seen from the PMG in a while, but Metheny still leaves plenty of room for the trademark piano and guitar improvisations that we have come to expect from he and keyboard conceptualist, Lyle Mays. Metheny's impeccable sense of timing (honed over 30 years of live performance) results in a video that ebbs and flows very comfortably. From the strains and technical vigor of "Imaginary Day" and "Heat of the Day" to the beautifully subtle "September Fifteenth," the pacing of Imaginary Day Live strides for its listeners as does any PMG concert.

Imaginary Day Live has proven to be an historic document too. Paul Wertico, PMG's long time drummer, left the band after concluding the Imaginary Day World Tour and Pat Metheny has since significantly changed the group's personnel and style. This DVD is a memento to Wertico's influence during one period of the group's greatest performances.

Bassist (and producer) Steve Rodby directs this recording very tastefully. He deftly combines digital video effects with freeze frames, color correction and cross fades that both document the music and visually interpret the songs. None of the effects are intrusive or trendy enough to date this chronicle of music. Still, Rodby produces a visual effect that makes the music seem larger than it really is—an enhanced influence that Metheny himself has acknowledged in the music of this period.

Imaginary Day Live meets the group's goal of immersing its audience in sounds that can be engaged on several levels of appreciation. Pure musicians will love Metheny's sonic use of a fretless, nylon string guitar in "Imaginary Day," but the casual listener can still embrace the contemporary, and almost commercial, styling of songs like 1997's "Follow Me" and 1987's "Minuano (Six Eight)." Watch Imaginary Day Live in its entirety on first sitting. This DVD is, like Pat Metheny's entire career, a journey through musical style and creativity.

As the closing credits appear, you'll feel like you've been on a trip.