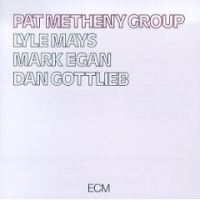 This album stands out from the others I've reviewed to date (for a number of reasons). I've been a Metheny fan my entire life, but had never thought of his work as groove oriented (except for the relatively recent commercially-successful release). But, I was wrong. I recently became more attuned to grooves through a playing experience and it opened my ears to hearing grooves better. When I put this album on recently after a long time since I had listened to it, I was amazed. All of a sudden, I hear the groove. Not that this is incredibly funky stuff—I wouldn't go so far as to call Metheny's work funky-but the pocket is there.

Alot of it has to do with the drumming. Danny Gottlieb's work is tremendous. He and bassist Mark Egan, who have a long-standing association, did a great job holding this together and creating more than an esoteric feel on this 1978 release. Take the tribute to Metheny's favorite bassist of the time Jaco Pastorius on the track "Jaco." Again, not funky, but tight and in the pocket. Gottlieb's solid kick and use of the hi-hat to fill the up-beat, Lyle Mays swinging fills on piano, and Egan's reverence for the downbeat all create an deceptively solid pulse. And of course, Metheny's playing flows through, fills, and accentuates the pocket.

Of course not everything here is "in the pocket." There are more serious pieces like "San Lorenzo" and "Phase Dance" (probably the best known track from this album), which contribute to the obfuscation of how really in the pocket this ensemble and release are. Even on "San Lorenzo," some of the passages, particularly the piano solo which starts out pianissimo and light and ends in all-out energy are really grooving in their own way. The same if true of "April Joy," a more serious track which is, however, driven by a strong groove. There are two more tracks on the release—a brief, atmospheric track "Aprilwind" and a neo-bop jaunt Lone Jack.

Of course, one of Metheny's many strengths is creative versatility—the group doesn't do just one thing—even in the same track. And here, what you hear is less an issue of production, as is the case with the work of most contemporary jazz release these days, and more an issue of inspiration, expression, and interpretation. Where is grooves it grooves, where it doesn't it doesn't intend to, and it's all oustandingly played and interpreted. No note, no beat, no voicing is misplaced.