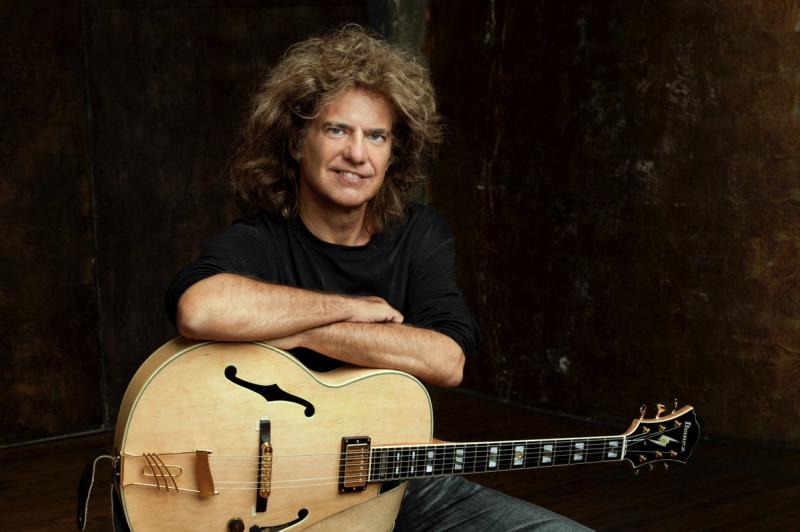 Pat Metheny remains a highly popular, award winning force in the music business after more than four decades. The still-amazing guitarist and his current ensemble demonstrated exactly why, many times over, during their dynamic set in Cologne's beautiful symphony hall. This extensive tour, generically deemed "An Evening with Pat Metheny," encompassed much of the 2017 calendar and civilized world offering a comprehensive set list for long time fans or newer listeners.

The band, featuring longtime percussionist partner Antonio Sanchez with Gwilym Simcock on piano and Linda May Han Oh on bass, were totally up to the task of presenting the meat of Metheny's vast catalogue in both tightly scripted or abstract tonal forms.

The challenge is presenting the iconic guitarist's music in a manner that both preserves original pedigree yet delivers a new perspective. This night in Cologne, such a spark was consistently ignited to fine effect, though not without a couple minor misfires in charted cohesion. A few segments seemed somewhat formulaic, likely a necessary concession when covering as many bases as team Metheny managed to address. No new songs were apparent, but modified arrangements and interspersed improvisational jams kept things plenty fresh enough for the fans. Overall, the set was a prime example of incorporating recognizable FM radio classics with more obscure nuggets.

There were occasional "business as usual" vibes, as familiarity bred admiration not contempt. Judging from the boisterous cheers that arose after at least half the material presented, Metheny and crew delivered just what the customers wanted. "You might notice we're playing older songs, some that I don't usually do," Metheny said in his only statement to the audience beyond thanks and naming the players. "I'm glad to see what this band does with them."

Ultimately, the 2½ hour show had more than enough superb segments to keep an audience enthralled. The musicians looked and sounded thoroughly engaged, no easy task with the extensive and widespread touring schedule this quartet maintained.

As usual, Perez's drumming was a clinic in itself while Oh left her own strong impression. Her climactic, semi- improvisational duet with Metheny was one of the show's very strongest moments.

Unfortunately, Simcock's efforts were muffled at many points. When you could hear him he obviously added to the equation. Why the piano was sporadically drowned out remains a mystery of the mix.

Metheny occasionally switched guitars to employ a couple of his personalized Manzer acoustic models, but for most of the show he relied primarily on what looked like his familiar, blond Ibeniz signature and the maple-hued Roland synth that shrieked sensationally.

Metheny opened the show solo, with "Into the Dream" musings on his unique, multi-string Pikasso. Harp like chords immediately hypnotized the sell out swarm of over two thousand fans, who raised the ornamental roof when the rest of the band emerged from varied shades of violet stage lighting.

Very briefly at first, the group's sound was downright poor. A direct segue into "So It May Secretly Begin" was nearly ruined by faulty sound, at least on the left side of the hall; as initial guitar tones were drowned out. Some of Metheny's faithful followers, decked out in various tour t-shirts, shared a communal shudder.

A couple dials got adjusted, and the groove emerged. Simcock's piano finally came through clearly, just before his solo during an edgy take on "Bright Size Life" that included an amped-up sequence to mark the show's first "wow" moment, less than ten minutes in. A few seconds of loud distortion tainted the total effort, but the quartet easily rallied behind the tune's modular strength and got the audience moving happily. Oh held down the foundational fort as she and Sanchez provided a vibrant pulse all night. A hard rocking "Lone Jack" featured rousing, rapid fire dialogue between them.

The acoustics sounded perfect for "Tell Her You Saw Me," well before the show's midway point, and the rest of the evening was superb. "The Red One" explored new ground under fractured fuzz and a deep, intense bass buzz with Oh on the bow for some acid blues unlike anything Metheny has done around Germany lately.

Ultimately, Simcock got his moment of glory on a "Phase Dance" two-piece with Metheny that was one of the night's most positively received pieces. Some fine-tuned, go get it type jams on a "Question and Answer" duet with Sanchez capped off the night's regular segment and kept the crowd howling to set up a pair of sublimely concluding "encores."

After a minute and a half of sincere applause and cheers, Metheny returned to the stage alone as his trusty stagehand returned the Pikasso for a stirring "Last Train Home" type medley that almost brought the house down. It was a classic Metheny performance to close the show, and then there was yet another as "Song for Bilbao" gave the entire quartet a chance to solo and soar.

All the politely effective, unsung hero usher/usherettes deserve special kudos for a great job throughout the night stopping camera phone amateurs from ruining any artist-audience ambiance.

The lobby buzzed with positive energy as the crowd made a cheerful exit into light precipitation. Outside the concert hall everyone seemed energized; large brown leaves danced along curving, windswept cobblestones adjacent to the spectacular cathedral area. As people made their way into the evening mist, many were still smiling, and you could hear them humming familiar Metheny refrains. No one seemed to mind the rain.