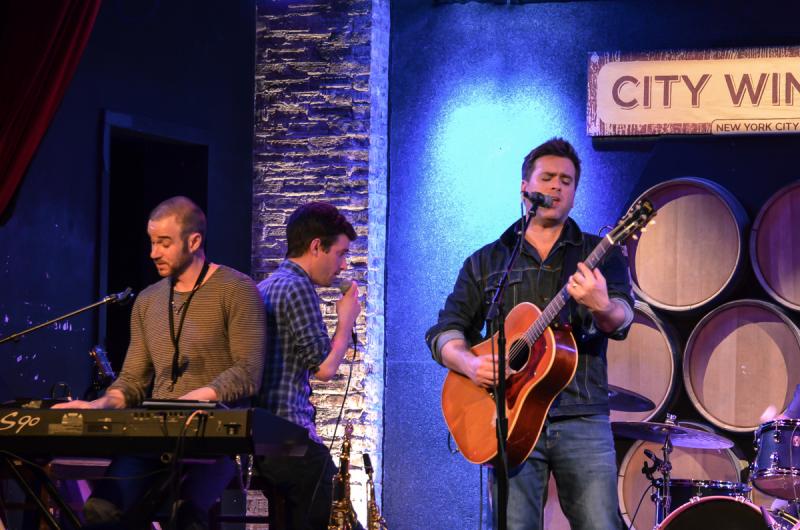 For those who are not aware, Pat McGee is a singer/songwriter/classic rocker who's self-titled CD is his tenth. He along with his band have toured and sold-out venues across the United States, have performed for President Clinton and shared the stage with: the Who, the Allman Brothers, Fleetwood Mac, James Taylor, Counting Crows and many more. His hook-filled music has elements of rock, pop, jamband rock 'n' roll, a touch of soul and a lot of heart. During his career, he has been signed to major labels, released CDs on independent labels and even managed to sell over 100,000 CDs before he scored that major label record deal with Warner Brothers subsidiary, Giant Records in 1997. McGee is a survivor and his joyous brand of rock causes his audience to bop and rock in its seats and to jump to its feet and dance in the aisles.

On this evening, talented Philadelphia-based singer/songwriter Matt Duke (who would also later perform with McGee and the band) opened the show with a memorable solo performance accompanied by his six string guitar, his strong voice and his canon of melodic story-songs based on novels, examine the characters of his literary heroes and his religious upbringing.

After a very short intermission, Pat McGee and his talented friends took over the small stage. In short order, McGee and his cohorts offered the crowd exactly what it had come for—a 20 year trip down memory lane with an eye firmly on the future as he premiered songs from his new release.

The evening's performance included old favorites such as "Elizabeth" about his daughter, as well as stories about her and his other children (Juliet and Anna) and their trip earlier that day to Times Square. Main set highlights included: "Kite String," "You And I," a drummer-less version of Jackson Browne's "Running On Empty," "Straight Curve" which segued into a short snipped of the Allman's version of "One Way Out" and "Overboard" the first single from his upcoming album. As the night unfolded, McGee and Ghegan made it clear that the evening was a family affair as they both gave shout-outs to their children, who were twirling and dancing toward the back of the venue while watching their dads play. McGee went so far as to invite the kids to dance on stage during a number of songs, however, shyness won out and they remained in their area happily watching the show.

It was a special evening, dedicated to family, friends and, of course, the fans who were in attendance. McGee repeatedly explained that the evening would be rated closer to PG as there were young family members in the audience. He also specifically thanked friends and long-time fans that he spied in the crowd. McGee urged new friends to stop by after the show, say hello and become one of the first people to own a copy (which he would happily autograph) of his new disc.