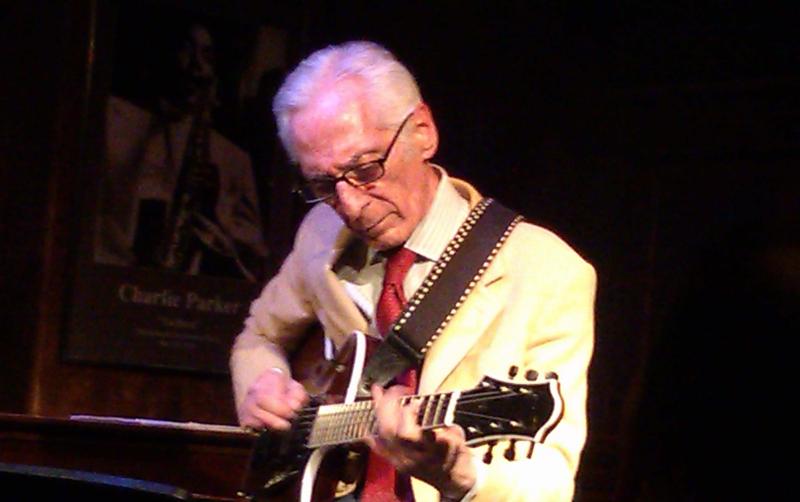 Guitar legend Pat Martino periodically supplements his working trio—consisting of himself, organist Pat Bianchi, and drummer Carmen Intorre—with a horn section of Alex Norris on trumpet and Adam Niewood on tenor saxophone. This post-Thanksgiving set at Chris' Jazz Café demonstrated that this quintet has evolved into a tight, coordinated unit where Martino shines but the ensemble effect is "undeniable," which also happens to be the title of a recent Martino album (Highnote, 2012). Martino can be playful and experimental when he wants to be, but in this show, it was all about discipline, quality, and synchronization. Everything was perfectly placed and arranged, something like a fine recording or dinner at a cordon bleu restaurant.

The opening number was Martino's own "Nightwings," a swinging tune from which one could immediately sense the airtight ensemble effect. The theme was stated in unison by the horns, guitar, and organ. It then broke out into solos by Martino, Norris, and Niewood, all of which stayed well within the bounds of post-bop improvisation. Martino's "Black Glass," slowed the tempo, allowing Bianchi to provide a circuitous yet finely executed solo on the Hammond B-3 organ. The piece built in intensity to a powerful climax. The arrangements for all the tunes were standard and very much consistent with one another: AABA statement of the song, followed by individual improvisations, intensifying to a bright conclusion. This format allowed the listener to focus on the trajectory rather than reacting to one or another "gas" of a solo. It was the way one listens to classical music: no room for clinking glasses and conversation here.

Wes Montgomery's "Full House" has almost become Martino's signature tune. In it, the consciousnesses of Montgomery and Martino merge into a powerful statement about the jazz guitar. Paradoxically, the organ is vital to this statement, and Bianchi molded himself seamlessly into this rendition, while Intorre's drumming gave it the powerful "ego orgasm" feeling connoted by the title. Charles Mingus' ballad, "Duke Ellington's Sound of Love" gave Martino the opportunity to explore a range of subtle feelings and inflexions, which he has honed into a fine craft. It was also interesting to observe Martino enjoying the process of comping for the other musicians, which suggests how comfortable he has become with this group.

The infrequently performed "Hipsippy Blues" by Hank Mobley, is so much in the blues tradition, that the melody slips by and the focus becomes on the chord progression. This allowed Niewood and Norris to take straightforward choruses, with Niewood in the post-Coltrane style of saxophone playing and Norris channeling Freddie Hubbard with a touch of Woody Shaw thrown in for good measure. All of which nicely set the stage for John Coltrane's "Impressions," which over several decades Martino has honed into the definitive guitar version. Martino's stunning solo was overshadowed only by the contrapuntal all-out swing of the whole ensemble as they brought the piece and the set to an energetic conclusion.

This reviewer has followed Martino closely during the past decade, and has been fascinated to notice the subtle differences between different gigs and recordings within what is a remarkably consistent lifetime approach to the guitar. As he listened, he kept going back in his mind to some wondrous recordings of another legend, the late great Joe Pass. After the set, he mused with Martino why he and Pass—arguably the two greatest post-Montgomery guitarists -are rarely compared and contrasted. Martino was equally puzzled, remembering warmly that he and Pass were close friends in their early days and learned a lot from one another.

On December 3, Martino will be performing in concert for the Jazz Bridge "Realbook" series in Philadelphia, another opportunity for folks in the City of Brotherly Love to hear their native son who repeatedly over six decades has earned the reputation of an incomparable jazz legend.