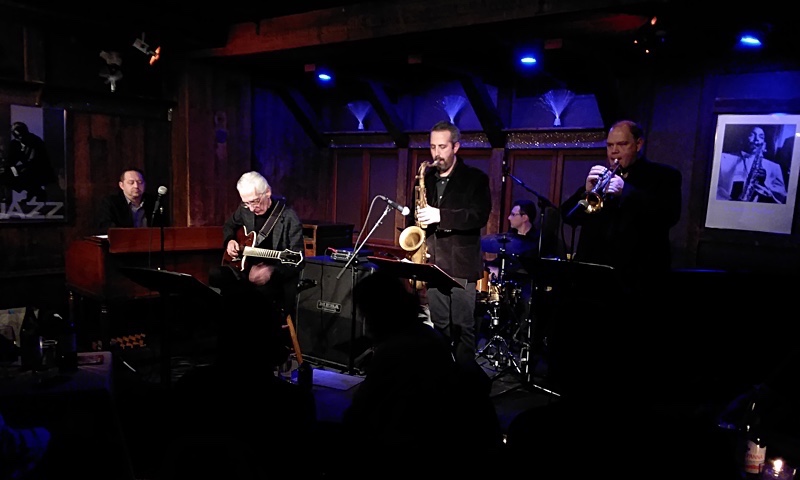 This first set of legendary Pat Martino's yearly two night Thanksgiving engagement at Chris' Jazz Café celebrated the release of his Quintet's CD Formidable (HighNote, 2017). The guys were really prepared for some hefty music-making, deserving the word "formidable," which on the CD cover, with Martino standing beside a statue of a lion, connoted the presence of the master with his pride. Here, in live performance, Martino's guitar was amped up and he played with leonine intensity, in contrast with the album's more reserved approach.

As in the album, the music had more than hints of the 1960s group that birthed Martino, the Willis "Gator" Jackson Quintet, with its soul music emphasis. Pat Bianchi's organ and Carmen Intorre, Jr.'s drums kept the group rolling relentlessly through five extended numbers, without a ballad to break up the momentum. The result was Martino and the group delivering their full ammunition from beginning to end. Two of the songs, "Hipsippy Blues" and "El Nino" are on the album, and the others,John Coltrane's "Impressions," Wes Montgomery's "Full House," and Sonny Rollins' "Oleo" are Martino staples. The group delivered one of the steamiest performances this reviewer has ever heard.

Straight from the start, with a fast-paced version of "Impressions," the group was "in the zone" with tight coordination and solid improvising. Erudite solos by Martino, trumpeter Alex Norris, Jr., and tenor saxophonist Adam Niewood were followed by all three trading fours with drummer Intorre. "Hipsippy Blues" is a perfect foil for soul music, and was delivered with intensity of the Willard Jackson group in which Martino made his mark during his Harlem days.

Martino's idol is, of course, Wes Montgomery, and the latter's "Full House" is virtually his theme song on many gigs. Martino got the Montgomery sound just right, while Norris and Niewood stepped up with solid post-bop solos, with Norris embodying players like Woody Shaw and Freddie Hubbard with his bright sound and resilient progressions.

In "El Niño," Martino unleashed an incomparable solo, one for the books, reaching a frenetic peak of brilliance and virtuosity that only a guitarist as steady-handed as he could keep tight and precise. Niewood and Norris then let the light shine by stepping back a bit in a walking dialogue with Bianchi's organ.

The set concluded with Sonny Rollins' standard "Oleo," arguably Martino's favorite be-bop tune, but this time launching like a NASA spacecraft taking off from Cape Canaveral. Intorre topped off this musical lift-off with smash-bang drum solo that landed the crowd on the moon.

It was truly a phenomenon to experience Martino, with over half a century under his belt interrupted by medical conditions that would have caused many of us to wrap it up, coming on fresh as ever, at the height of his powers, in perfect form. With the support of those around him, he has encountered the most difficult life circumstances with a life force and love of humanity that we can all learn from -that is, when we are not enthralled by the magic of his playing. Thank you, Mr. Martino.