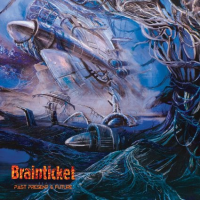 In 2015, Cleopatra Records reissued fabled experimental Krautrock band, Brainticket's 1973 album, Celestial Ocean. However, keyboardist and flutist Joel Vandroogenbroeck has abided by a slow pace when releasing subsequent material for mass consumption. Known as a risqué unit that mirrored some of the avant musings evidenced by fellow 70s ensembles, Can and Amon Duul, the musicians are back in action with a rather urbane and radiantly produced musical statement.

The musicians finalize the album with a slowly paced blues motif, simply titled "Brainticket Blues." Again, the vocalists' liquefied voices abet the neo-ambient electronica vibe, paralleling the leader's soulful flute lines, crisp organ parts and streaming electronics treatments. They grind out an easygoing disposition with lyricism pertaining to the rings of Saturn, space-rocking and other intergalactic connotations. Indeed, it's a cosmic blues augmented Nicky Garratt's sliding guitar notes that generate a transcendental dreamscape component. And while this band doesn't possess the voluminous recorded output of its peers, the musicians always give it their best shot while taking pride in producing qualitative frameworks and provocative outcomes. Thus, Past, Present & Future is an appropriate title since the musicians merge and reinvent patterns or stylistic tendencies from various musical eras while also instilling a freshly concocted solar wind into the big picture.