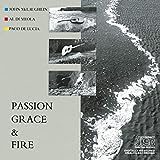 Never has an album been so justly deserving of its title. In 1983, the guitar super trio of John McLaughlin, Al DiMeola and Paco DeLucia followed up their phenomenal live acoustic album Friday Night in San Francisco with this masterpiece of a studio recording. The prevailing opinion at the time was that the raw excitement of the original live recording could never be matched in the recording studio. Delightfully, the Trio answered all those who had questioned its potential with Passion Grace and Fire. Its greater dependence upon melodies may even make PG&F the superior release.

Each guitarist contributed two compositions, and all pieces feature the Trio playing written out parts and improvising over a theme. No player dominates, as the format does not provide for contests or duels. And best of all, the acoustic guitars are recorded flawlessly.

"David" is an enchanting John McLaughlin composition where he delivers a haunting and seemingly time-defying lead performance. McLaughlin is the very rare (or perhaps unique) musician who quite literally is able to bend or suspend time in his playing. It is really quite unexplainable.

DeLucia's brilliance is clearly heard in his piece "Chiquito", in which he expands the language of Flamenco into all sorts of open spaces. DiMeola's strongest moments occur during his composition honored as the title piece. Timed in at just a little over 30 brief minutes, Passion Grace and Fire could have included a few more tunes, but it's still a masterpiece.

The live tour in support of this album featured a giddy Steve Morse as the opening act. You could sense his joy as he joined his heroes for the encores.