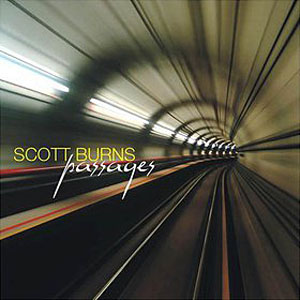 Chicago-based tenor saxophonist Scott Burns has said that he practices each exercise, pattern, or whatever else he may be working on until he gets it perfect. Five times in a row. The results of this type of practicing couldn't be any more obvious than on Passages, release by Origin in 2006. Through this rigorous study, Burns has sufficiently assimilated the sounds of the great tenor players that have come before him in order to produce his own powerful yet unique voice.

Another result of this type of practice is that anything in the realm of acrobatic saxophone playing seems possible for him; however, Burns finds perfect moments to create poignant lines that don't necessarily challenge his technique but, rather, push the limits of his soul. He can be heard nestled into that beautiful balance between technical facility and stirring held-out notes on tunes such as "Storm Rising." Burns seems to be set free by the medium swing that's set up by bassist Dennis Carroll and drummer George Fludas on this medium blues, reminiscent of John Coltrane's "Equinox." This track is also a beautiful example of pianist Ron Perillo's more sympathetic accompaniment. He finds that delicate balance between giving Burns enough material to go off of, and also leaving him the space he needs to develop his own ideas.

Every tune on the album being an original only adds to Burns' unique voice as a player. Much like a Joshua Redman of the early '90s, he has clearly taken advantage of his pen and used it to make his playing shine in the brightest ways it can. This couldn't be more obvious than in the way each composition highlights Burns' blues-rooted playing. Though these tunes all sound fantastic, it would be interesting to hear Burns do a little more with the arrangements on some of the more simpler tunes, such as "Downhill Stroll." Not that there's anything wrong with playing the melody in, playing solos, and playing the melody out, but a bass solo on the album would've been nice.

The last track, "Eddies In The Stream," boasts the most complex arrangement and, rather than simply closing out the album, seems to show some sort of new direction. From the introduction of a somewhat exotic percussion instrument called a "cricket," which can be heard chirping along in the groove, to the ebb and flow of a time feel that works in and out of driving sections and more free form sections, this last song becomes a beacon of things yet to come. Surely, if Burns continues down this path of disciplined practicing and blues-informed composing, he could add himself to an already esteemed line of Chicago tenor saxophone players.