By DAN BILAWSKY
February 13, 2013
Sign in to view read count 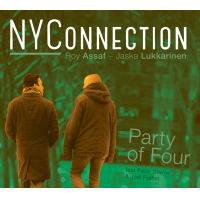 The genesis of Party Of Four can be traced back to 2007, when a friendship of two was solidified. Finnish drummer Jaska Lukkarinen and Israeli pianist Roy Assaf found each other at that fateful point in their respective careers and, shortly thereafter, NYConnection was born. While the band took its maiden voyage as a piano trio in the spring of that same year, it's evolved over time, becoming a worldly quartet with a diverse outlook on jazz.

Assaf and Lukkarinen are joined by Bulgarian bassist Peter Slavov and American tenor saxophonist Joel Frahm, who each say their fair share and put their respective imprints on this music, but the music itself still belongs to the founding fathers. Lukkarinen penned three of the eight tunes on the album and four of the remaining five come from the mind of Assaf, who also arranged the only cover on the date—Bobby Timmons' "Dat Dere."

NYConnection's music isn't built with a specific esthetic in mind, and no single ideal permeates this album, but the idea of musical geo-chemistry is constantly in play. This should come as no great shock, with four different personalities from four distinctly different locales meeting at the jazz crossroads of the world, but it still deserves mention. Each of these four men has a deep respect for what the others bring to the table, but none are subservient in the face of creation; they let their respective personalities come alive within each given structure.

Slinky and sly suggestions can be found at the front end of the program (Timmons' "Dat Dere"), but that's only chapter one of the story. As the album unfolds, NYConnection introduces songs with subplots and side stories that don't fit into a nice little box. Icy and open Nordic pathways, for instance, introduce "Can I Just Call You David," but the music eventually coalesces into a more stable form, gets a touch of Middle Eastern exoticism from Assaf, and reaches a more tempestuous place when all parties involved ratchet up the tension. Elsewhere, loping swing and tumbling drum phrases serve as a leaping off point for a more nuanced journey ("Fault Zone"), and bluesy, boppish and beyond share the same living space ("Hey Man In The Line")

NYConnection is just one more example—and a fine one at that—of how jazz is the great cultural equalizer; four men from four different realms find common ground in the city that never sleeps..