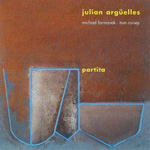 Partita, the sixth CD to come out under the leadership of Julian Argüelles, consists of fifteen tracks occupying less than 48 minutes, and over half of them don't even top the two-minute mark. Argüelles concentrates more or less exclusively on his tenor sax for the longer tracks, while the snippets are literally too short to merit prolonged discussion. It all makes for frustrating listening.

The meditative air of the relatively extended "Warm Winter Coat Of Spruce features Argüelles overdubbing various reed parts, and while the piece does reveal a lyrical heart, it also has the curious effect of highlighting just how tellingly John Surman has mapped out similar musical territory in the past.

Formanek and Rainey make for a formidable rhythm duo, and there's no better evidence of this here than on "Evan's Freedom Pass, where the trio seems to be at its most coherent, working a near-free groove with consummate skill. Their assets are also in evidence on "Lesters, which exhibits the kind of line that Charles Brackeen would get the finest degree of nuance and colour out of.

An early Jan Garbarek trio is apparently one of the influences on this music, although it has to be said that something like "Peace For D has about it a more generic air than anything the Norwegian iconoclast ever committed to record.

The frustration really sets in with "Sub Rosa, whose 1:21 duration passes by as some kind of preamble to something of greater ambition that never arrives. Instead the spooks of "Bottom Drawer Pages evoke a certain anxiety only to be dissipated for no apparent reason. On the 1:14 of "Leash, Argüelles initially unleashes the kind of furies that only Pharoah Sanders or Frank Wright might have allowed past quality control, before the trio settles to lighting some fleeting fire. "Tempus once again seemingly mines a Surman seam, only with less commitment.

There's usually little point in rueing what might have been, but in this case it can't be helped as the overall feel of this programme is of music held in check, rendered earthbound for whatever reasons other than sheer brevity, though that in itself is a serious issue. Such is life.