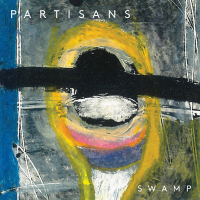 Partisans, seen by many as the godfathers of the flourishing UK prog jazz scene, plough their own idiosyncratic path on this their fifth album, and first to appear on London label of the moment Whirlwind. The title conjures up fears of a blues rock abomination but thankfully the gentlemen have refrained from donning bandanas or placing cigarettes in the band of a wide brimmed hat to instead produce an eclectic treat.

The dominant colour of the musical palette may well be Silent Way/Bitches Brew era Miles Davis but this is no pastiche, Partisans add their own colours, textures, emphases and accents. So while there might be references to the "It's About That Time" bass line on "Low Glow" or a touch of "Shhhh/Peaceful" in the cymbal on "Icicle Architects" they never overwhelm the overall feel and the band add more than enough to pull the music in different directions. The blend with the light African influenced guitar lines on opener "Flip the Sneck" is particularly effective for example.

Even the title track, which you might reasonably suspect ran the greatest risk of rocking out, neatly subverts the opening "Bitches Brew" keyboard stabs by running an ominous "Papa Was A Rolling Stone" type bass line underneath the wah wah guitar until the band enter with an intriguing circular rhythm. The jump closer to Norman Whitfield territory works well and puts the piece in a wholly different place—more Temptations than Ten Years After. Phil Robson's heavily treated guitar sound and rhythmic control in the initial section is a good example of the restraint shown, being angular, studied and thoughtful.

Many of the tracks shift time signatures and keys in quixotic fashion, but without the unnatural random feeling that can occur in lesser hands. So "Overview" starts out like sixties Motown with its good time bass line and breezy, African horn riff, before merging back into a 70s Miles Davis feel again, a little like "Maiysha" on Get Up With It in lightening effect if not specifics. Similarly the title track runs the reverse journey starting out in Bitches Brew territory before hitting a blaxploitation soundtrack feel in its final section, a more swaggering take than the seasonally affective seventies cop show theme that fits well in "Thin Man."

This is clearly a talented group of musicians recorded well, updating the jazz templates of the past with clever juxtapositions and fine playing. Julian Siegel in particular plays beautifully throughout —take the airiness of his solo on "Veto" snaking around Robson's effective rhythmic accompaniment for example. Similarly, on "Low Glow" he fits a welcoming late night solo around Thaddeus Kelly's bass to great effect.

This is an album to get swept up and along in—filmic, rhythmic and inventive throughout it rarely settles for the obvious, expected path and it repays concentrated listening with countless new discoveries. Best of all no bandana required.