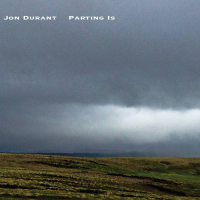 Imaginative guitarist Jon Durant, co-leader of the band Burnt Belief with Colin Edwards of Porcupine Tree, traveled between the East Coast and his second home near Portland, Oregon, to produce this set of solo guitar works. Yet, according to the artist, the album title reflects the "sweet sorrow" that occurs after his wife visits for a long weekend then returns back East. Hence, Durant's inner-self is transposed via these atmospheric pieces, often resonating with his melodic single note lines and guitar-induced effects.

The guitarist's temperate ascent and use of echoing extended notes help facilitate shadowy treatments and resonating opuses, complete with textural shadings and layered voicings. Durant also integrates prismatic colors into these tracks amid ever-so-subtle chord structures and other eloquent articulations. Essentially, these pieces are engineered with cohesive thought-processes, and many components that draw upon his advanced technical skills.

Durant's polyphonic musings can be heard on "The Room Where She Waits," enacted with his yearning slide guitar passages atop placid undercurrents. However, "Before the Rain Falls" could serve as a soundtrack for a documentary of the International Space Station, where he conjures imagery of a timeless void with a cyclical groove etched in an enchanting melody line. But Durant punctually underscores "Ecliptic Shadows," with his soft fretless bass lines in support of another harmonious hook.

The final track "Williamette Fog," contain more loops and electronic manipulations to cast an existential vista where he slices through the fog on a horizontal plane, jolting his attack with sweeping background effects and sizzling sustain licks. Moreover, listening to this program with high-end headphones poses an even deeper sense of intimacy. Regardless, the pristine audio characteristics provide due justice for this magnetic endeavor.

Clouds in Advance; Open Window; Travels Within; The Room Where She Waits; Before the Rain Falls; Evolve in Place; Ecliptic Shadows; Returning to the Departure; Willamette Fog.