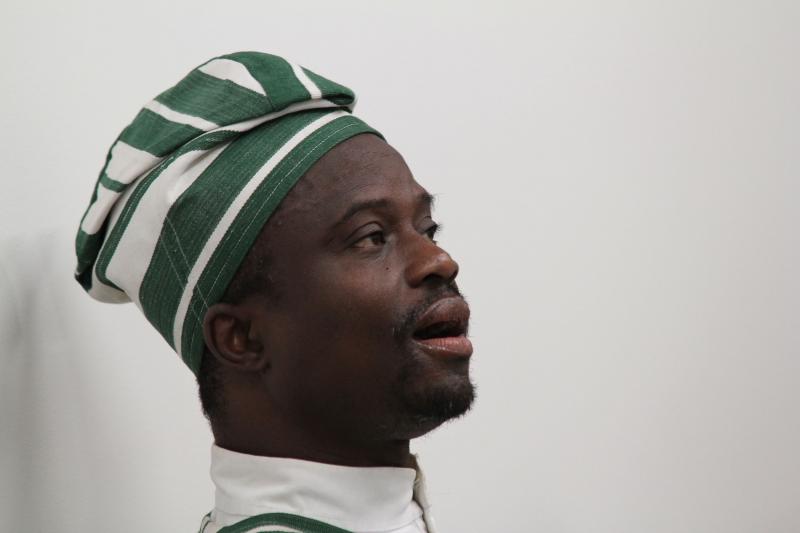 By CHRIS MAY
July 9, 2011
Sign in to view read count
In an illuminating interview, artist and sleeve designer Ghariokwu Lemi talks to Afrobeat Diaries about his work and friendship with Fela Kuti. The interview attests to the indelible link between Lemi's designs and Kuti's music, and to a working relationship which, Lemi reveals, broke down only once, over 1977's Sorrow Tears And Blood. The interview is a follow-up to an earlier one given by Lemi to Afrobeat Diaries, The Art Of Afrobeat.

Starting with 1974's Alagbon Close, and continuing through 1989's Beasts Of No Nation, Lemi was responsible for around half of Kuti's album sleeve designs. His art was, and remains, an integral part of Afrobeat's message. In 2011, Lemi is still Afrobeat's most sought-after sleeve designer.

"Fela composed the song 'Ikoyi Blindness' in 1975. It is about class disparity and insensitivity, using Nigerian society as its example and the Lagos metropolis as its focal point. Uptown Lagos consists of Ikoyi and Victoria Island, areas inhabited by the mega rich, the wealthy and the nouveau riche. While in downtown Lagos are decrepit areas like Mushin and Ajegunle, where the teeming masses live in poverty.

"My cover illustration portrays a puffed-up lawyer, representing the bourgeoisie, in the foreground, scurrying away in disregard of the vast, densely populated neighborhood in the background. This is my graphic way of expressing the uncharitable lack of attention given by the establishment to the needs of the wider society. The protagonist in his self-conceit rushes ahead in blind folly, preferring to head for the abyss rather than assuage the demands of the proletariat, who are in hot pursuit. In our society, we are wont to put square pegs in round holes, and that is putting it mildly. Colonial mentality is a hard yoke to break.

"The medium was oil on board, and was one of the rare instances where my cover art was done double the actual size of a record sleeve. About 95% of my covers are done the same size as the finished product. I found a willing and suitable model in my good friend Durotimi Ikujenyo, one-time rhythm pianist for Fela's Egypt 80 band. I often used real life models to capture the human expression I wanted to portray in my translation of the great musical and lyrical message of the legend, Fela Anikulapo-Kuti.

"Fela's change of last name from Ransome-Kuti to Anikulapo-Kuti was announced on this cover. I also took the opportunity to reveal my own new set of names.

"Fela wrote 'Yellow Fever' in 1975 and, like he usually did, performed it every week at the Africa Shrine and everywhere else he gave a show, until he eventually decided to make it into an album. I designed the Yellow Fever cover in 1976, having witnessed the composition of the song, and also being aware of the particular message that Fela was trying to put across to society in general, and women especially. The song is an admonition to African women who are fond of using bleaching creams to lighten their dark skin tone.

"Having listened to the song lyric several times and identified its central issues, I decided to use a model to express visually what Fela had orally illustrated in the song. Points of emphasis include the bad effect of skin lighteners on the face and bum. In this I saw an opportunity to display my talent in portraiture and figure drawing.

"My life model was a girl named Kokor, who was a member of the household in Kalakuta Republic [Kuti's live/work commune]. Actually, I remember to my chagrin that other girls were saying that they could recognize Kokor as the model. I had thought the rough patches I put on the face would have prevented Kokor being so easily recognizable.

"On this cover, I decided I was going to be straight-in-your-face with my imagery of a misinformed African beauty concept. I showed a rough and patchy face with boobs and bum in tow! Fela had taken great pains, in a no-holds-barred kind of way, to express disgust at the ignorance of the belief that skin lightening enhances African beauty. I showcased a typical offending cream in the top left corner of my cover art. This is representative of a typical bleaching cream in those days. 'Soyoyo Cream Skin Bleacher' was actually my own creation. The word 'soyoyo' is a Yoruba expression for 'bright and glow,' while 'Soyoyo' here is actually referring to white people. Then I painted in the price tag of 40 naira. This was at the high end of the product range, but true. Despite an 'exclusive' price, these creams are so harmful to beauty and health, and to the psyche of African womenfolk.

"Fela reacted very positively when I submitted this cover for his approval. In his characteristic manner, he glowingly said, 'Goddamn!' To round up, he added, 'Lemi is a mutherfucker, me-e-n!!!'

"Well, Fela Kuti, and the way he treated social issues in his music, was always controversial. And so was my Yellow Fever cover.

"The cover art for Zombie is a bold collage of guerrilla reportage photographs, using a cut-up technique. The dynamism of this idea is a fitting vehicle for what is perhaps the most provocative of Fela's classic albums. Fela wrote 'Zombie' in 1976, having been several times harassed by military personnel. The then military government in Nigeria had, amongst other objectionable things, instructed soldiers to horsewhip erring drivers on the highway, in an on-the-spot meting out of punishment. The soldiers carried out this order with a dumb obedience suggestive of real zombies in action.

"The instant Fela composed the song, everyone, including some military personnel from the nearby Albati Barracks, fell in love with the catchy rhythm, and the martial tempo, which galvanized the dancers, who wouldn't let the song end. Fela's cheeky reprise of the army bugle call got them jumping and whooping with joy at being able to mock the oppressors they feared and despised. The song became an anthem of protest for students and workers. A weapon of sorts, which they chanted under their breath anytime they felt oppressed by military personnel.

"When the time came for me to do the cover art for this landmark song, I at first found myself unable to focus on the right idea. I was overwhelmed with different ways of graphically expressing the song. The breakthrough came just in time one Kalakuta morning, when Fela was asking how the sleeve was coming along. At that moment, Tunde Kuboye, a photographer, film maker and jazz musician, and the husband of Fela's niece, Frances, walked in. He was carrying a bunch of his recent photographs, taken at the Independence Day military parade in Tafawa Balewa Square.

"I think that sometimes the universe provides material when I need something really badly for my art. Tunde walked in at the right time with those amazing photographs. As we checked them out, I couldn't hold back my excitement as I recognized the fortuitous materials I had been craving in my spirit. I just exclaimed 'Aaaahhh, this na wetin ah go use for the cover, men-n!'

"With Tunde's permission, I selected ten military images, and a few of Fela. I was set on making a graphic collage on this cover. Back in my studio, I laid a cardboard matte on my drawing board and edited Tunde's ten shots down to four.

"I remember that at that moment I was feeling like a shaman. I was trying to see how they fit, and as I put them down, the pictures just dropped into a position reminiscent of an Ifa divination—without conscious effort on my part. Quickly, not wanting to take any chances, I fitted the pictures down with masking tape, then traced their position in pencil. Spreading the Cow Gum from its red tube, I overlapped the photos and deftly cut and pasted them down. Thereafter using a hard paintbrush and thick poster color paint, I wrote in freehand the album title, Fela's name and that of the band directly over the picture, outlining the result with a Rotring pen. Finally, I added the shadows.

"The sleeve was like a solid shadow of the song and was an instant hit at Kalakuta, in Nigeria, Africa and around the world. Its immediacy led new listeners to wonder what lay on the inviting vinyl inside. For the initiated, it told the story of life under an oppressive military dictatorship—and what it takes to come through feeling that you're still somehow in command of your destiny. Like the mighty Fela Anikulapo-Kuti, fearless in admonishing the guilty ones here. 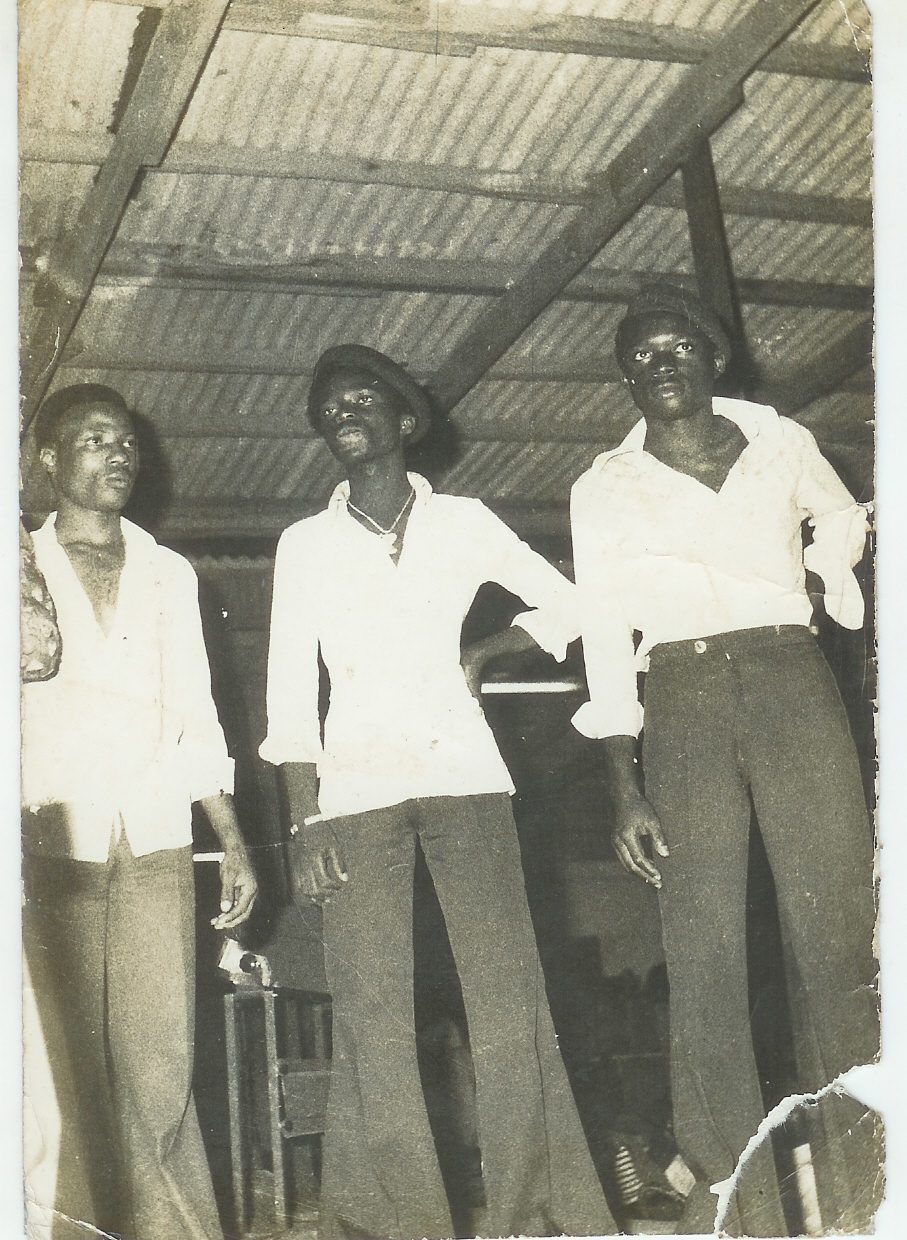 "I sometimes get into a reverie and spin back my life's time-capsule to the golden days of the 1970s: the great times I had with friends and accomplices trying out a little naughtiness and rascality, and maybe some criminality, the moment we were let out of the sight and control of our parents or guardians. And here I was in Kalakuta every day of the year, visiting with my mentor and patron and doing some reasoning—occasions when we sometimes delivered judgement on the evils being perpetrated by the establishment.

"Yes, it was the best of all times to be a soul rebel and a youth radical. [Photo shows Lemi, centre, with Mabinuori Idowu, left, and Durotimi Ikujenyo, the three founder members of the activist group the Young African Pioneers, at YAP's launch at the Shrine in 1976. 'The three musketeers,' says Lemi. 'Fela was the don dada.']

"Fela wanted me to learn to smoke. He had been nudging me for quite a while, and sometimes in a mischievous way. 'How can my artist be drinking Fanta Fanta Fanta? Lemi you have to smoke igbo [weed], men-n!!!' That was it. The master had marked his territory and the acolyte had to go through a paradigm shift.

"It was Wednesday, June 16, 1976, early evening, and Fela had shared a little goro [a weed-infused drink] with me. I was high as a kite and feeling light as a feather, and walked gingerly in the company of Fela, his friends and aides, to his Range Rover. Off we drove to Ikate, Surulere, in Lagos, to visit Fela's immediate family: his first wife, Remi, and three children, Yeni, Femi and Sola. They lived away from all the drama at Kalakuta. As we sat in the family living room exchanging banter, I was in a mental struggle to stay focused and keep my concentration. I remember asking questions like, 'Can I can go ease myself in the bathroom and not flounder?' Fela was as patient as a nurse in explaining that being high was different from drunkenness, that I should just focus on being creative with my thoughts.