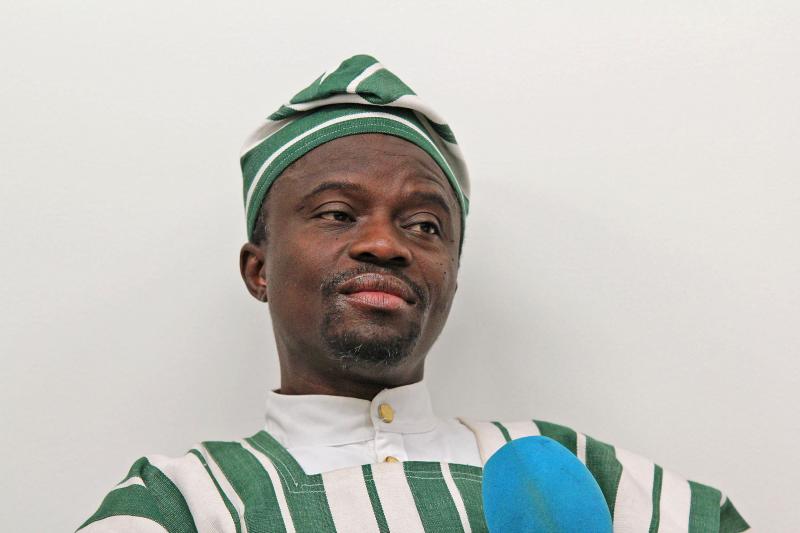 By CHRIS MAY
May 11, 2011
Sign in to view read count
Ghariokwu Lemi—"born, bred and buttered" in Lagos, Nigeria, where he continues to live—is an artist and graphic designer who created 26 of Fela Kuti's album covers, including many of his most powerful ones. Since his Kuti debut, for 1974's Alagbon Close, Lemi's art has been an integral part of Afrobeat's Pan African message, working hand in hand with the music to identify injustice, educate, galvanize protest and bring about change.

Alongside his design work, Lemi was in 1976 a founder member of the Young African Pioneers (YAP), who took Afrobeat's political message into the protest and publishing worlds. Wholly in sympathy with Kuti's philosophy, but always his own man, Lemi's work has been enriched by his experiences as an activist, and this adds to its power.

Looking at least a decade younger than his 55 years, Lemi continues to be a vital part of Afrobeat, and is the cover designer of choice for artists in Nigeria and overseas. Among the hundreds of covers he has designed, his recent work includes designs for Brooklyn's Antibalas and Akoya Afrobeat Ensemble groups, and for Seun Anikulapo Kuti's From Africa With Fury: Rise (Knitting Factory, 2011). The success of the Broadway musical FELA! in 2010/11 has given a welcome boost to Lemi's career, with exhibitions being planned on several continents.

All About Jazz: Can you remember the first piece of Fela's music you heard?

AAJ: What attracted you to Fela's music?

GL: If it was "Jeun K'oku" I heard first, it must have been the popularity; it was being played everywhere. Later on, I started recognizing the boldness of Fela's character and delivery.

AAJ: When did you first encounter him?

GL: I met Fela in 1974, when I was 18 and raring to go, in a circumstance I attribute to predestination, because I strongly believe in destiny. The acolyte met the master, and, as they say in metaphysics, when the student is ready, the teacher is always available. I know there was a reason and a rhyme to our meeting and the fact that our destinies had to cross at that time for this project—the mission towards Africa's mental liberation—which is the road which I've been traveling throughout my life.

AAJ: Did Fela suggest you design an album cover, or did you suggest it to him?

GL: Fela asked me to design an album cover after I had passed my initial test, which was doing a portrait under the prompting of Babatunde Harrison, who was then entertainment writer for The Punch newspaper in Lagos. It was Alagbon Close, in 1974. It was the beginning of a dynasty of covers that carried the message of the music. In total I created 26 of Fela's album covers, over a period spanning three decades, from the mid 1970s to the early 1990s. 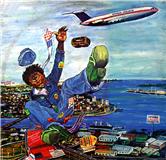 AAJ: Did Fela give you complete creative freedom? Did he ever ask you to change a design?

GL: Fela gave me complete creative freedom to express myself in whatever way or form I deemed fit on the album covers. I was so free that I believe today that I'm still the only cover artist who has had the privilege of putting his photograph, and also his own comments, on the back of a record sleeve [Lemi's commentaries became features of his Afrika 70 covers]. Only once did Fela ask me to change a design. The album was J.J.D. Johnny Just Drop, which came out in 1977. I did as he asked, but I also retained my original design [pictured above, showing a young Afro-coiffed, Cuban-heeled "been-to" falling out of a plane] by making the sleeve a double jacket, even though it was a single record in the album.

I used my original concept for the back cover and Fela's idea for the front cover [a top-hatted, morning-suited "been-to" landing in a Lagos street to the bemusement of passers-by]. I felt we were both right, from our individual perspectives. Fela wanted to direct his attack on the bourgeoisie, and I thought to face the youths with my own critique of colonial mentality. I surreptitiously turned the sleeve into a double sleeve to accommodate both our views. Being given such a free hand by Fela helped me when I approached the then managing director of Decca West Africa, John Boot, with my double jacket idea. Sleeves were printed by Robert Stace printers in England in those days, and Mr Boot took artworks to England and returned with a beautiful package which he promptly showed to me.

I took the first copy to show Fela. As I approached Fela's presence, I said to him from a safe distance, "Fela, see JJD sleeve." I showed him the front cover and said, "This is your own," and, in a split second, turned the album round to show the back cover image, which was the one he had asked to be changed, and said, "This is mine." Fela looked at me, gave a sheepish smile, and said, "Lemi, you hit me below the belt!." Without further ado, I dashed off from the room in a half run of mischief, and that was the end of the matter. My point had been made without a fuss. Like my Rasta bredrens would say: "Easy squeezy makes no riot, mi breda."

AAJ: Among all your covers, did Fela have any special favorites?

GL: I think he loved every one of them. I don't know of any favorites he had. I guess we may have to ask Fela himself!

AAJ: Alongside working with Fela's musical message, you were active in the Young African Pioneers too, weren't you? 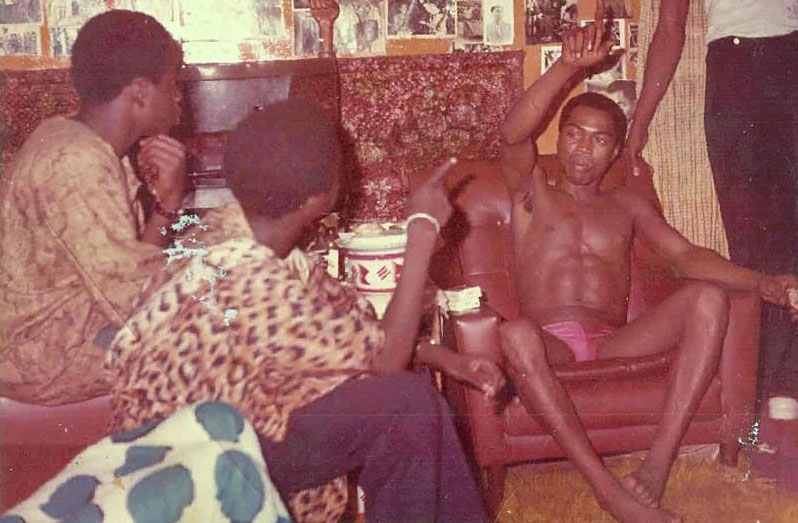 GL: I was a founder member of YAP. That was in 1976. My role was mainly ideological and I did all the designs [YAP published a newspaper, fliers and posters]. I always took part in intellectual activities, and on a few occasions I took part in civil disobedience in my own little way.

With the albums and YAP, I was intensely involved with Fela. But I never lived at Kalakuta. I always carved a niche for myself, I always knew who I am and what I can do, and I always had my own head screwed on tight. I didn't have a need to live in Kalakuta at all. I know Fela would have loved me to, but believe me, I am a different warrior. There's a photo of me with Fela [pictured above] pointing in the same direction he is: we agreed totally in the realm of Pan African ideology and its progressive philosophy!

AAJ: Which aspects of Fela's philosophy do you feel are most important today?

GL: The philosophical and ideological aspects are one and the same, and they remain relevant and very important, even more so today. Africa has not moved progressively one step forward in my own observations from the 1970s until now. All the problems Fela was singing about have become even worse. The level of ignorance is deepening for lack of proper education, a proper curriculum in all levels of institutions of learning. Compound that with the proliferation of the monstrosity called religion and you have a people forever sinking deeper and deeper into a sleepless slumber.

When I look at people walking in the streets all over Africa, I see most are dressed in western clothing, even though it is hot and balmy here. All the youngsters, boys and girls, are in denim jeans and sometimes I feel like I'm walking in the streets in New York or London. I remember my cover art for JJD and wonder when the message will hit home. By the same token, when I see ninety per cent of our women with straightened hair, and some using skin-lightening creams, I remember the Yellow Fever [1976] cover art and I shake my head. And I shake it more when I look at the state of the world today and the role of western imperialism—when I look at what happened in Iraq and Afghanistan, and what is happening in Libya, in the guise of protecting a people from their own dictators, only to end up adding more catastrophe to an already bad situation. In the end, we are left to wonder. I remember, in a very fond way, my cover for Beasts of No Nation [1989]. I could go on and on, but I think those are enough examples to illustrate my point.

AAJ: Aside from your work with Fela, what other covers are you particularly pleased with?

GL: I'm happy with a legion of them, to be honest. But to mention just a few, I'd have to include covers for The Mandators, Orits Wiliki, Antibalas and Akoya Afrobeat—and most recently, for Seun Anikulapo Kuti's From Africa With Fury: Rise [2011].

AAJ: How would you sum up your life and work so far?

GL: My life and my work are conscious and my art is my life. Whatever I try to do, it is activist in my own style and tempo. I believe strongly that art has a great role to play in the engineering of any progressive society. I have come a very long way from my observations to identify my own obligations, because I also believe strongly we all have a role to play in our respective societies—and at some point in our lives, we should be able to move from the observation stage into the obligation stage. I feel privileged to be alive today to see the world as it is presently running and be able to compare it with our revolutionary zeal in the 1970s. My work and my mission continues and I will never give up the light for any form of darkness, even though the world may seem so consumed right now.

GL: I just finished a trip to Norway where I took part in the Another Music Exhibition. Brazil has been cancelled because of the landslide. London and Oslo are knocking for September/October, and Finland and Paris are slated for early 2012. I have lofty dreams and ideas to consolidate my legacy, and I want to be busy in their regard the rest of my life. My dreams never die fast, I must tell you. My dreams are made to last forever and a day.

To be continued: A follow-up interview with Ghariokwu Lemi, conducted following the opening of FELA! in Lagos, is slated for Afrobeat Diaries. Stay tuned.

All Photos: Courtesy of Ghariokwu Lemi