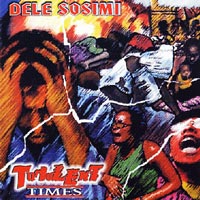 Whatever you may think of musicals, and most people either love them or hate them, the New York and London productions of Fela! are to be welcomed. Both have been distinguished as much by their house bands as by their leading actors and dancers, and, as a result, both have done Fela Kuti's legacy proud—confirming, if confirmation was needed, the Afrobeat originator's enduring power to connect.

That in itself is something to celebrate. And the shows have also boosted the profiles of the house bands themselves. The New York lineup is built around Brooklyn's decade-old Afrobeat ensemble, Antibalas—and has also included the outstanding percussionist Yoshiro Takemasa, from another fine Brooklyn group, Akoya Afrobeat—and in late 2010, Ropeadope reissued Antibalas' 2004 album, Who Is This America?. The show's London lineup includes ex-Egypt 80 keyboardist Dele Sosimi in a pivotal role (he's also music consultant to the production), and while we wait for the next Sosimi album, anyone who's yet to check out his 2002 own-name debut, the magnificent Turbulent Times, is in for a treat.

First, a little background. When he was only 16 years old, Sosimi joined Egypt 80, later becoming its music director. He was part of the band which produced the late masterpiece Teacher Don't Teach Me Nonsense (Wrasse, 1986), produced by Wally Badarou, which successfully reimagined the role of keyboards in Afrobeat. Other important albums featuring Sosimi include I.T.T. (International Thief Thief) (1979), Authority Stealing (1980), Original Sufferhead (1982), Perambulator (1983) and Army Arrangement (1985). He was a member of Femi Kuti's Positive Force for over ten years, before moving to London in the mid-1990s.

The with-vocals but essentially instrumental Turbulent Times picks up where Teacher Don't Teach Me Nonsense left off, foregrounding keyboards still further, and to brilliant effect. The cracking ten-piece band, which includes some of London's top Afrobeat musicians along with some of its best jazz players, nails all the key Afrobeat essentials—vocal and instrumental call and response, rich horn arrangements, socio-political engagement, tenor guitar licks, signature rhythms—while also nudging them into then-new territory. Each of the six tunes serves as a platform for the band's soloists: trumpeter/flugelhornist Byron Wallen (two solos), baritone saxophonist Tony Kofi (two), tenor saxophonist Linus Bewley (one), trombonist Justin Thurgur (also in the London Fela! lineup, one), guitarist Kunle Olasoju (one), bassist Femi Elias (one) and drummer Feyi Akinwunmi (one). Sosimi himself solos, in a winningly melodic, jazz-inflected style, on most tracks (and sings, briefly but convincingly, on four of them). The combination of a red hot band, inventive arrangements rooted in the tradition but of their own time, and singular soloists given their heads is simply outstanding.

Turbulent Times is a little masterpiece, and it deserves—and in the Fela! slipstream may actually receive—a lot more attention in 2011 than it got first time around. It's an album that should be in any serious Afrobeat collection.

Another Afrobeat crusader enjoying the spillage of limelight from Fela! is artist (and, back in the day, Young African Pioneer) Ghariokwu Lemi, who designed many of Afrika 70's most striking record sleeves. Given complete creative license by Kuti, Lemi's work did more than complement the music, becoming an Afrobeat phenomenon in itself. Top galleries around the world are now interested in showing Lemi's work and a book is in the offing. Turbulent Times features a Lemi front cover (as did Akoya's 2008 Afrobomb album, President Dey Pass). There's talk of Lemi designing the cover for Seun Kuti's next album, due later in 2011, and another for Chicago Afrobeat Project.

There are plenty of well-produced concert clips of Sosimi viewable on YouTube, but the shaky, low-fi footage below, shot at one of Sosimi's bimonthly Afrobeat Vibration nights—a highlight of the London Afrobeat scene—conveys the spirit of the music well.

Sosimi's follow-up to Turbulent Times, 2007's Identity (Helico), will be reviewed in a forthcoming Afrobeat Diary.