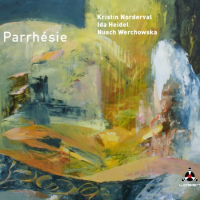 Kristin Norderval has a lot on her mind. Most of us do, of course, but most of us probably tend to keep some mental distance between the enjoyable pleasantries (art, music obsessions and the like) and the remainder of life that's somewhat less fun (worries about society or the future of the planet). Norderval isn't like most of us; for her it's all inseparable. Her instrument is the voice, and what she's feeling is what comes out at the microphone. It's sublimated into singing, murmuring, cooing, wailing and anything else the human larynx is capable of.

It's an approach aptly suited to the title Parrhésie, a term which apparently means "bold, fearless speech and a compulsion to speak the truth even at personal risk." The recording was first planned against the backdrop of the Paris COP21 talks and with Pope Francis's anti-capitalism encyclical prominently in their minds—clearly issues worthy of the name. Fellow experimental artists Ida Heidel and Nusch Werchowska make the other partners in "spontaneous combustible collaborative composition" here, and all are equally willing to stretch conceptions of what they and their instruments can do. While nothing resembles a melody more than vaguely, the trio aim instead to paint moods and dynamic arcs with pure sounds alone.

The trio's backgrounds are rooted in free improvisation, classical and opera, and naturally it makes for an album toward the loosest avant-garde end of the scale. Werchowska's treatment of the piano avoids any structure with seemingly aimless harmonics, often involving knocking its frame or tapping the strings rather than hitting keys. Likewise, Heidel flutters and breathes through her flute more than she plays recognizable notes. The dialogue is a slow game of call-and-answer that demands nothing if not patience.

A few stray phrases in the beginning suggest some thoughts about nature amid a bed of soft taps and chimes; for the rest of the album the voice becomes another wordless instrument to be manipulated according to the whim of the moment. Norderval gives a rollercoaster of vocal acrobatics throughout: swooping soprano lines, aria-worthy capering, slow chants and formless sound-shaping all make part of the mix. Relying on whatever sounds they can make in the moment and swearing off edits or overdubs, they manage a balancing act that turns out every bit as abstract and unpredictable as it looks. Parrhésie is like a soundtrack to some film that could never exist outside their own heads: dreamlike, passionate and consistently baffling.