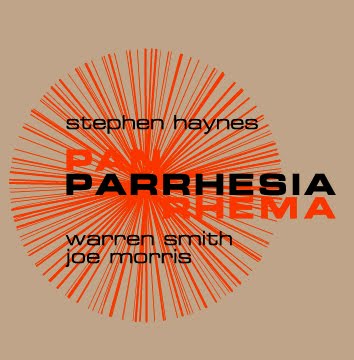 There's something about the plain brown recycled chipboard sleeve of Parrhesia, with its letter-pressed script, which relates to the music contained inside. It's not just the concern for sustainability, but also the understated, organic yet singular nature of the package. Trumpeter Stephen Haynes' leadership debut has been a long time coming, which perhaps suggests undue modesty. Mentor Bill Dixon looms large in the trumpeter's resume, but Haynes has been active since the early '70s, with many renowned leaders including composer George Russell, bassist Alan Silva, fellow cornetist Taylor Ho Bynum, and, not least, pianist Cecil Taylor, as part of his AHA! Orchestra.

Joining the brassman for this program of collectively birthed pieces are master percussionist Warren Smith and fellow Connecticut native Joe Morris, on electric guitar. The promotional material helpfully defines "parrhesia" as meaning "to speak everything" and, by extension, "to speak freely." But that just captures one aspect of the seven tripartite creations captured here: while they range freely, they avoid the obvious in doing so. Often carved out at the extremes of instrumental language, there is nonetheless a narrative impulse; a sense of stories being recounted, even if their meaning cannot be deciphered.

The eerie "Reclamation" furnishes a perfect example: its muffled otherworldly opening conjured from shuffling rhythm, groaning guitar and muted brass mutterings and gurgling to evoke some obscure occult ritual. Neither guitar nor trumpet match their expected sonic profiles, here or throughout much of this disc. Haynes sweeps from the abstractedly lyrical to the near demented, from lilting wah wah murmurs to deep buzzing growls. One characteristic of his playing (also adopted by Bynum) is his extensive use of mutes to bend and vocalize notes and set up contrasting voices. Morris' crablike scuttling in the bass register and indeterminate tapping on his detuned guitar, together with Smith's predilection for marimba, creates a haunting and unpredictable experience.

It all combines to produce a delight for those who like to delve into timbral detail, to revel in the weight attached to each sound and the subtle changes in the intonation of breath through brass. The only misfire comes on "Yet and Still," where Smith's recitation suffers the problem of most others, in that the words don't stand up to the repeated listening which the music demands. Even here, there is some redemption in Haynes' fine concluding series of piercing clarion calls over a gentle drifting undercurrent. It's introversion, laced with flashes of passionate intensity, which could act as a summation for this intriguing set.