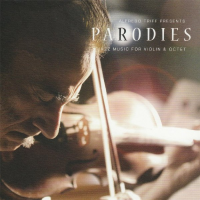 American-Cuban violinist Alfredo Triff is known for his long-standing work with composer-arranger-songwriter-producer Kip Hanrahan that began in 1985—five years after Triff arrived to New york from Havana, Cuba—and continues to this day. But Triff's work encompasses more than Hanrahan music. He experimented with recording solo electric violin, released solo albums that presented his diverse musical interests in changing formats, collaborated with Brazilian singer-poet Arnaldo Antunes and toured with another of Hanrahan frequent collaborators, Jack Bruce, and participated on Bruce's album Shadows in the Air (Sanctuary, 2001).

Triff fits perfectly within Hanrahan eclectic musical universe, where Latin rhythms and forms blend organically with free jazz, prog-rock and suggestive-sensual poetic texts. Triff's fifth solo album has a similar eclectic quality. It is a set of 17 short pieces for violin and octet that reflect his rich and literate musical language and seminal artists who affected his aesthetics, beginning with his Afro-Cuban heritage, moving through contemporary composers, poets and conceptual artists and concluding with a musical nod to Hanrahan. And, as the opening piece is titled. "For the Sake of Argument," Triff makes a strong case for the violin as a legitimate and integral instrument in modern jazz formats.

The 17 pieces stress Triff's gift to articulate clear and strong melodic ideas, fleshed impressively by his group, featuring pianist Raul Murciano, guitarist Rene Toledo, flutist and tenor saxophonist Jose Valentino and two other Hanrahan associates—drummer Horacio "El Negro" Hernandez and percussionist Robby Ameen. Triff turns such short compositions as "Aurora Borealis," "Sweet Smell of Success," "Can God Roll A Blunt So Strong That Even He Can't Hit It?" And "Glunk Cannot Be Unthunk" into multi-layered, playful-ironic and rhythmic textures, often sounding as advanced drafts for more elaborate and challenging compositions. As expected his homage to Hanrahan, "Blues for Mr. Hanrahan," is a moving, sensual piece that refuses to be pinpointed in any boundaries of genre, style or era.