By DAN BILAWSKY
February 4, 2014
Sign in to view read count 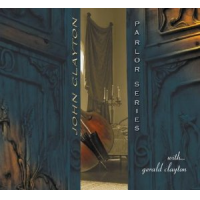 The Parlor Series was conceived of long before it came into existence. Bassist/Composer/Arranger/Educator extraordinaire John Clayton had long hoped to explore the piano-bass duo medium on record. He had admired albums like This One's For Blanton (Pablo, 1974), which paired his mentor—bass legend Ray Brown—with the great Duke Ellington, and Steal Away (Verve, 1995), which brought bassist Charlie Haden and pianist Hank Jones together in service of spirituals. Clayton even told Jones how much he loved that album, going so far as to express his good-natured jealousy surrounding the fact that he wasn't the one who played on it. At that point, Jones suggested they do a duo project.

While Clayton was game for an in-studio meeting with Jones, things didn't come together very well. Clayton booked some studio time in 2007 and got ready for the encounter, but Jones' health threw a wrench in the plan. That's when Clayton pulled out his rolodex and started to imagine what other piano-bass duo combinations might sound like. The late Mulgrew Miller and Clayton's supremely gifted offspring, Gerald Clayton, were his first calls, and both men were into the idea.

Those who are curious will be happy to hear that Jones and Clayton eventually did get together to record before the pianist passed on. The encounters with Jones and Miller will each see the light of day as future releases in this series, but the first volume is a family affair.

The father-and-son team of John and Gerald Clayton takes pride here in exploring eight musical gems with a no fuss attitude or, in Clayton's own words, in a "let's-just-see-what-happens atmosphere." Some of the performances are enjoyable if not notable ("Alone Together"), others bring a tear to the eye with their direct approach (Billy Joel's "And So It Goes"), and a few prove so compelling and arresting that they're hard to let go of; "Zingaro," a smile-inducing "Isfahan," and an alluring "Sunny Day Go" all fall into that last category.

Nothing here is bound to blow minds or cause a stir, nor is that the intention. John Clayton just wants to invite people into his parlor to hear what he does, and what he does is special in its own beautiful way.

Alone Together; If I Should Lose You; Zingaro; Yesterdays; And So It Goes; Isfahan; Sunny Day Go; All The Things You Are.