By JACK BOWERS
December 1, 1999
Sign in to view read count 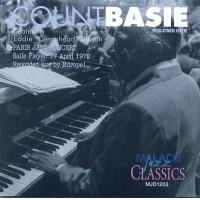 There are at least two things one must keep in mind when considering live or studio recordings made some years ago by well— known Jazz artists or groups and released on compact disc by not—so—well—known labels. One is playing time; the other is over—all sound quality. The Count Basie Orchestra's Paris Jazz Concert, which took place twenty—seven years ago and was repackaged this year by Malaco Classics, passes the first test with flying colors, clocking in at a generous 72:35, but fares less well on the second. Although the sound isn't nearly so poor as on other renovated concert recordings we've heard, there are ever—shifting problems with balance and clarity, leaving no doubt that the equipment used was not up to present— day standards. On the other hand, soloists come through loud and clear, which isn't always the case under such conditions, and the Count's spare piano, Freddie Green's dependable rhythm guitar and Harold Jones' resonant drums are well—served by the mics —almost as well as the audience, whose applause is more clamorous than any thunderbolts launched by the band. Turning (at last) to the music, it's typically Basie, which means typically lean, mean and swinging. As usual, the Count gives many of his sidemen a chance to shine, and none of them lets him or the audience down. They include alto saxophonist Curtis Peagler and trumpeter Pete Minger ("Meeting"), trumpeter Wayman Reed ("The Python"), alto Bobby Plater ("Yellow Days," "Meditation"), tenor Eddie "Lockjaw" Davis ("From This Moment On," "Lover"), flutist Eric Dixon ("It Could Happen to You") and trombonist Al Grey ("The Spirit Is Willing"). Eddie "Cleanhead" Vinson emulates Jimmy Rushing on the last four numbers ("Clean Head Blues," "Cherry Red," "Person to Person," "Hold It Right There"). Joe Williams, the band's regular vocalist, doesn't appear, and that sector would have been in better hands if he had. Completing the program are "Big Stuff," Ernie Wilkins' "Basie Power," Sammy Nestico's "Fun Time," Quincy Jones' "I Need to Be Bee'd With" and two Neal Hefti charts, "Cherry Point" and "Whirly Bird." This is more than an hour of industrial—strength Basie, which in terms of merit speaks for itself; if pristine sound isn't a consideration, it's definitely worth checking out.

Basie Power; Big Stuff; Fun Time; Meeting; The Python; Yellow Days; From This Moment On; It Could Happen to You; The Spirit Is Willing; Cherry Point; Lover; I Need to Be Bee’d With; Meditation; Whirly Bird; Clean Head Blues; Cherry Red; Person to Person; Hold It Right There (72:35).