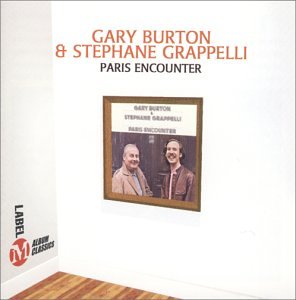 The old guard meets the new. Here is the phenomenon Gary Burton, before he became an institution.

In 1969, Gary Burton was blazing jazz trails that could not exactly be described as traditional. He teams up with Le Hot Club of France Stephane Grappelli, conservative stalwart in the European tradition, for a little stroll around the block. The year 1935 was a long time ago. Here we have an electric bass. Not only that, Steve Swallow is behind it. Round this date out with Bill Goodwin and the uninitiated might suspect that Monsieur Grappelli is out numbered by younger players. Non matter, Grappelli plays even the Swallow original "Elderdown" as if he wrote it himself.

Grappelli more than any other jazz violinist identified that instrument with himself, much in the same way Toots Theilmans did the harmonica. No matter who the violinist is, be it Jean-Luc Ponty, Michel Urbaniak, or Regina Carter, the listener can always hear Grappelli. For his own credit, Burton behaves and turns out his most accessible playing of the period. Steve Swallow if fine even as a young man. Apex of the disc may be Miles "Blue in Green." This release is a super empathy between the old and the new. Recommended.