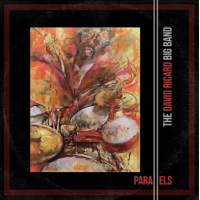 Whatever else the fates may decree, fortune must be smiling when one can open a big-band album with the workaday theme from "Spider-Man" and make it shine. Bassist David Ricard is fortune's beneficiary here, as are those partisans who are lucky enough to chance upon Parallels, Ricard's third and most recent treatise on big-band excellence. Whereas the leader's earlier recordings were slanted toward the holiday season, the theme of this one, if indeed one can be ascertained, is focused on the parallels between Ricard's life and that of his father, Jack Ricard, an illustrator and cartoonist for ads, movie posters and, most notably, the covers of Mad magazine.

If there is a certain madness to Ricard's writing, it is never without method; that is to say, every one of his charts is overspread with melody, harmony, counterpoint, rhythm—in other words, all the ingredients that make big-band jazz as persuasive as it is pleasing. Equally persuasive and pleasing is Ricard's ensemble, comprising a number of the most accomplished sidemen (and women: trumpeter Anne King, trombonist Juliane Gralle) in the greater Los Angeles area, Ricard's home base, and faraway New York City. Ricard wrote nine of the album's fourteen enticing themes and arranged all of them.

As noted, "Spiderman" raises the curtain, its sing-song cadences enhanced by snappy solos from guitarist Will Brahm and trumpeter Wayne Bergeron. Ricard's sunny "Wandering Waltz" is a pleasure to hear, as are the three originals that follow: "The Big To Do List" (featuring trumpeter Mike Cottone and vibraphonist Billy Hulting), "Come Out Swingin'" (Doug Webb, tenor; Grant Geissman, guitar) and the lovely "Sarah's Theme" (Aaron Heick, alto sax). "Pass the Peas" has more than enough funk to please, while Ricard's hip arrangement of "The Odd Couple" adds spice to Neal Hefti / Sammy Cahn's well-known theme from the Neil Simon play / film / TV series (as does Noah Preminger's supple tenor sax).

Ricard's resourceful charts and perceptive choices of material help make Parallels a consistently bright and pleasurable big-band album. It helps, too, to have a corps of musicians to whom the music seems second nature. Well worth one's time and consideration.