By FRANCESCO MARTINELLI
September 24, 2013
Sign in to view read count 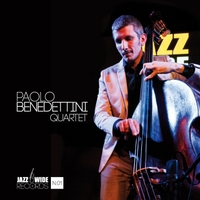 I'm afraid a little local pride is in order here. Bassist Paolo Benedettini hails from my hometown of Pisa, and the disc has been recorded and produced locally in cooperation with the Jazzwide organization, very active in promoting events both in the club of the same name as well as in other venues of the Leaning Tower city thanks to the passion and committment of Francesco Mariotti.

Not that I see Paolo very much in town, unless he has a gig. We happen to meet a lot at the airport, because he's very active internationally: in fact he's currently a student artist at Juilliard, after many years of private studies with his mentor Ron Carter, and recently played a high-profile gig as a member of Jimmy Cobb's trio at the Village Vanguard. Such are the intricacies of the modern world that while the Pisan musician is in Manhattan, two of his sidemen, hailing from opposite sides of the world, reside in Italy: trombonist Humberto Amesquita, whom I first met in Siena while he was a student of the International Jazz Masters at Siena Jazz, comes from Peru, while drummer Adam Pache, well-respected in the Italian jazz scene, hails from Sidney, even if he arrived in Italy after extensive residences in New York. Marco Bovi, a new name to me before listening to this band, operates in different musical areas especially around the Italian North-East. So how does this very international spaghetti jazz sound? Tasty, rich and original. A pianoless band with a frontline of trombone and guitar led by a bassist is bound to be interesting: the combination of these two lead voices is rare, the most illustrious example being the late, prized Joe Pass/J.J. Johnson radical duo record on Pablo while the weird orchestral ("Mondo Cane," anyone?) offering by Kai Winding and Kenny Burrell is not a real inspiration here. The group is lean and original in sound, deeply rooted in the jazz tradition with an open point of view on it. The style is uncluttered to the point of being minimal, due to the very melodic phrasing of the drummer, and to the ample spaces allowed to the single voices to stretch.

Attractive right from the start, an inspired reading of Thelonious Monk's "Criss Cross" with the melodic lead played by the double bass, the Cd follows a balanced path with classic but not overplayed songs like the bluesy Receipt Please by Ron Carter (from his album with Jim Hall, clearly an inspiration here) and "Monk's Mood," as well as originals by Benedettini, Bovi and others like Kelvin Sholar (Paobene, dedicated to the leader) and Barend Middelhoff (with whom Bovi worked regularly). The meditative Monk tune again features the bass in the melody statement, and it's a good chance to appreciate the dark, compact tone of Amesquita, and how he can introduce subtle changes staying close to the melody. The following "Paobene" on the contrary requires agility, and Humberto inserts a modicum of that Latin fire.

The winding melody of Jim Hall's "Waltz New"(a word play on "What's New" but somehow related to "Someday My Prince Will Come") is given an elegant, succinct version as a guitar/bass duo, a tribute to the creator's many recordings with Red Mitchell, and in fact three duets for the string instruments only are presented before the original closing track, the most surprising one for me being "The Pendulum At Falcon's Lair" by Oscar Pettiford, a boppish tune recorded exactly 60 years ago and getting deservedly popular among young musicians. The final "Count Hang" by Bovi and Benedettini brings the proceedings to a festive end: an enjoyable, promising release by a committed and serious young player.