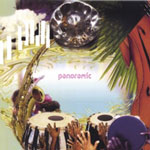 The opening title track on this album may make you suspect that you're in strore for Caribbean music at the height of tourist season, with lots of rhythms coming from the steel pan and associated instruments. But continued listening will reveal a diverse album full of surprises.

The chief architect of this group is its co-founder, a native Trinidadian. Liam Teague began winning competitions on the steel pan at the age of thirteen, one year after he began playing it. His dream is to take the lowly instrument to new heights. Teague has proven fluent in calypso, jazz and classical music, and he has the credentials to prove it. In fact, one press wag actually referred to him as "the Paganini of Pans."

While Andy Narell may have been at the pinnacle of adapting the steel pan to commercial success (insofar as smooth jazz fused with a good-time Caribbean feeling) and Othello Molineaux may have gathered some fans with his performances alongside Monty Alexander, Teague clearly has eclipsed them with this new album.

Teague is joined by Panoramic's co-founder, Robert Chappell, who performs on piano, marimba, vibraphone and tabla. The group is rounded out by Puerto Rican percussionist Orlando Cotto, saxophonist Doug Stone, drummer Phil Beale, and bassist Joshua Ramos; the tunes were composed by Teague and Chappell.

What is most interesting about Rhythm Through The Unobstructed View are the variations that the musicians employ from the influences of world music. While the opening track is party time music, appropriately dedicated to Trinidadian calypsonian David Rudder, the scene shifts on "Orlando's Cha-Cha," which begins with Cotto's expert salsa rhythms on marimba and ends with Stone's straight-ahead jazz solo. "Chant" merges East African rhythms with the Indian raga and recalls the fusion group Shakti.

"Ivory Coast" uses the Cuban bata drums to further help shorten the musical distance between the two countries. The bata drums appear again in "Nikkara," replicating the evolution of ancient Turkish drums which is evident in the pulse of Bollywood music from India. Finally, "Calcados Feliz" ("Happy Footwear") shows a distinct Brazilian influence.