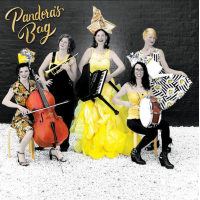 Joanna Weinberg is an Australian songwriter, piano and accordion player, actress and film star. She has been nominated for an Australian critics circle award; the composer and writer of Every Single Saturday (the soccer parent musical); she is also the composer and writer of the musical, Lifeforce, which won the pick of the Fringe at the 2013 Sydney Fringe Festival. Weinberg specializes in writing and performing one woman shows, she has written over ten of them, including the critically acclaimed Baroness Bianka's Bloodsongs which played in September 2014 at the Hayes Theatre in Sydney. She has released four albums of original songs, her last offering The Piano Diaries, received critical acclaim in the U.S. and abroad. Weinberg has a vast body of film and theatre credits, accessible on her imdb.com listing. Outside of theatre and film, Joanna is also the musical director of Choir Rocks in the Rocks in Sydney.

Weinberg's latest work, Pandora's Bag, finds the composer-lyricist singing and playing on ten clever songs all connected by the idea of the female bag or purse. The bag or purse is examined as a metaphor for all things female and explored as adornment, a status symbol and keeper of memories. Joining Weinberg is Ellen Kirkwood on trumpet, Kate Adams on cello and Nicola Ossher on drums, balofon and percussion.

With the songs on Pandora's Bag, being of thematic scenes Weinberg's lyrics have purpose and are extremely witty and at times quite wry. For example, the opening track "Why Won't You Let Me Die" is based on a 95-year-old singer whom Weinberg met in a nursing home. She gave Weinberg her handbag as a keepsake in exchange for a song about her life. The result is a stirring call for euthanasia, with an oxymoronic listen, which quickly transports you to a thematic plot. The choruses have nice vocal harmonies, oh and did I mention Weinberg's voice is amazing, you will find yourself getting so wrapped up in the finely crafted humor, that you momentarily forget, how capable she is as a vocalist. Kirkwood's warm trumpet adds a solo and fills that are a perfect match to the song.

Weinberg's voice is dramatic and shinning both in energetic character and intricate nuances, there is so much talent to take in with Weinberg, you have to revel at times to take in how much mastery is at work, another fine example is "My Favourite Accessory" a fun selection that finds Weinberg's voice chancing in character with each phrase, sometimes sexy and sometimes witty. Ossher keeps steady time and Adams, who plays the cello pizzato and functions like a bassist, moves the bottom along. Again, the lyrics are fun and filled with double meanings.

Pandora's Bag is humorous collection of tunes from a not-so-shy woman, willing to take the audience on an entertaining journey through thought-provoking subjects, that most songwriters would not dare. That just might be what you will adore about these songs as you sing-along. Weinberg has created a strong collection of metaphors; all memorable songs and a top-notch cast of performers that truly support her adventuresome spirit. A true keeper!