By ERNEST BARTELDES
July 7, 2006
Sign in to view read count 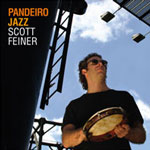 Just when you thought that there was very little left to be introduced to the world of jazz, here comes a New York City-born musician with a pandeiro (the Brazilian cousin of the tambourine) in his hand to prove otherwise.

There is nothing really new about the pandeiro—you can hear it on virtually every samba recording ever made, and Sergio Mendes often uses it in his live sets when performing tunes like "Mas Que Nada. But this is the first time I have heard it used as a replacement for the drums in a jazz quartet—especially on compositions by Coltrane, Wayne Shorter and Horace Silver.

Feiner, who now lives in Brazil, catches your attention immediately with Stevie Wonder's "Big Brother on the opening track—you can immediately tell that this is not a "Brazilianization (is there such word?) of jazz. Instead, it is a successful attempt to open horizons to an instrument that has long been relegated to a single genre.

A clear example of that is Feiner's own "The Sheriff. The presence of Freddie Bryant's acoustic guitar gives the tune a certain bossa nova flavor, but the song goes well beyond that, with rich soprano improvisations by Joel Frahm and masterful fills by Bryant. Coltrane's "Giant Steps is, however, taken to the streets of Rio: Feiner and Bryant give it a samba cadence, while Frahm uses its open spaces as an opportunity for improvisation. On the funky original "Botafogo Blues, the guitarist switches on his electric axe, and the fact that Feiner can extract that kind of beat from his instrument is nothing short of amazing.

The chemistry between Feiner, Frahm and Bryant is evident in a live setting like the group's recent appearance at Smoke. They opened with "Giant Steps and went on to Bryant's original composition "Denisio. This was an opportunity for the guitarist to record a couple of loops and improvise around them. Bassist Doug Weiss joined during the third number, Horace Silver's "Song For My Father.

One of the night's highlights was "That Old Devil Moon, performed as a duet with Feiner and Frahm. The pandeirista explained that this configuration came about during a promotional stop in the South, when the other musicians were unavailable and they decided to play the number on the spot. Amused by the results, they decided to include it on their regular setlists.

Pandeiro Jazz is an innovation which deserves a wide audience. However, you have to feel for the person who has to place this CD on the shelf at a store. Is this Brazilian jazz? Not really, even if the album was put out by Delira, a Brazilian label dedicated to instrumental music. To be honest, one can't fit this into a single genre. Call it jazz fusion if you will, but this disc is something way beyond that.