By ANDREY HENKIN
January 11, 2010
Sign in to view read count 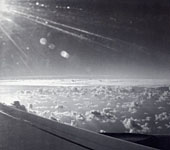 The "mashup," the blending of two or more songs to create a new work, has steadily gained popularity over the last decade. It is only fitting then that creative musicians feel free to utilize a similar approach when producing original music. Drummer Bobby Previte's Pan Atlantic seems to be an excellent example.

The title refers to the international composition of the band. Previte has been a New Yorker since 1979. Trombonist Gianluca Petrella is one of Italy's best-but-hopefully not-much-longer-kept secrets, working most notably with Enrico Rava. Saxophonist Wolfgang Puschnig is from the Slovene-speaking region of Austria and has been a member of both the Carla Bley Big Band and Vienna Art Orchestra. Keyboardist Benoit Delbecq of France has worked with a number of important European and American improvisers. And bassist Nils Davidsen is Danish...good for him.

The music is three-pronged in nature. Previte and Davidsen inhabit a quasi-groove state, working with simple, mesmerizing rhythms. Delbecq here is cinematic, creating a moody ambience. And Petrella and Puschnig are almost operatic, two divos in the best sense of the word and appropriate given their respective countries' contributions to that tradition. The music, all written by Previte (and in the case of the gorgeous closer "Veltin," played solely by him on Fender Rhodes), is elusive as a result. The ear bounces from one element to another or chases a melody down a twisted corridor, never quite catching up. This creates an amorphous feeling that is in no way insubstantial. Very loose templates for this album might be Miles Davis' fusion albums or maybe even Joe Farrell's Moon Germs (CTI, 1972).

Whatever wellspring it draws from, Previte proves himself to be a composer of uncommon grace for a drummer (was that a mallet that just flew by my head?). His last album, with a new incarnation of his Bump Band, showed off his slinkier side. Pan Atlantic finds him retreating into a lovely minimalism and showing that mashup doesn't mean mish-mosh.