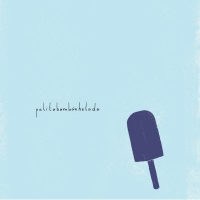 Aparecidos is best described as an outfit that's whimsical in a worldly way. This string-heavy group blends classical allusions, South American strains, Eastern European thoughts, and straight-up rock and outré ideals into one hell of a zany package. Its unique blend of violin, classical guitars, percussion, drums, bass and electric guitar, along with various other odds and ends thrown in for good measure, allows the group to come at music from all different angles, languages and perspectives.

While Palito Bombon Helado weighs in at less than forty minutes, making it trim by today's album standards, it isn't lightweight; this outing packs in the ideas and interesting twists like sardines. "Tanto Gonfio Saremo" goes from circus waltz to faux Cuba to pastoral pastures in quick succession and "La Cumbia Ingles" gives electric guitarist Marco Ravera a chance to unravel some Santana-esque lines before things move in a more Villa-Lobos-leaning direction. "Zamba Del Chaparròn" turns into the bastard child of mariachi and polka, while "Saracinesca" comes off as a carnival-esque musing on a Hora-Tarantella-Bulgarian Wedding hybrid.

ADVERTISEMENT
Cross rhythmic conversations, polyglot presentations and oddball antics pop up on virtually every track in some way, shape or form. Drummer Santo Florelli brings a flair for the dramatic into the picture with his occasional left turns into heady/heavy territory, interrupting relatively serene settings with some slamming drums, and guitarists Facundo Moreno and Santiago Moreno mix old world craft with out-of-this-world antics. Percussionist Manuel Merialdo fills the gaps, playing the role of musical colorist, and Mattia Tommasini's violin brings a sense of high art into the picture.

It's tempting to label this group as "experimental," but that tag often carries a sense of anti-music with it. This isn't a loose and dissonant aggregate molded in the free jazz fires. This is a highly organized group that simply doesn't subscribe to a single geo-stylistic dogma. Aparecidos co-opts and twists various folk traditions and modern ideals to its liking, and sounds damn good doing it.