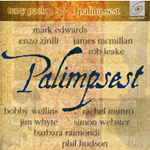 During a career that spans four decades, British bassist Terry Pack has been a member of prog rockers The Enid, worked as a session musician for a diverse array of musicians including Steve Howe and Candy Dulfer and played in bands across much of the world from Europe to South America and Australia. He played jazz from his earliest years as a musician, working with singer Liane Carroll from the early 1980s, and in 2006 he released his first album as bandleader—What Happens Now (Symbol Records). Palimpsest is his follow-up—a beautifully-played, graceful, record that combines classic tunes with Pack's own compositions.

Two tunes from Miles Davis' Kind of Blue(Columbia, 1959) are featured and in both cases Pack's arrangements offer fresh perspectives. "Blue in Green" opens with a strong bass solo from Pack before pianist Mark Edwards and drummer Enzo Zirilli enter emphatically to create a lovely trio performance. "All Blues" opens with a funky bass, piano, drum trio that keeps close to the original melody and features a fine couple of solos from Edwards and Rob Leake on alto. A Portuguese version of Sting's "Fragile"—"Fragilidade"—benefits from the smoky vocals of Barbara Raimondi and another lovely solo from Edwards. "Amazing Grace" is given a reverential treatment with Pack's bass and Edwards' piano taking turns to play the melody over Zirilli's nicely understated drums and Edwards' chordal organ part.

Pack's own compositions are a joy, displaying inventiveness, humor and some great grooves. "El Puebla Nuevo" is a strong opener, its danceable rhythm driving a wordless vocal chorus before a wild trumpet solo from James McMillan. "Seven Sisters" is another trio piece—a lovely straight-ahead ballad. "Louis Borenius"—dedicated to Pack's late musician friend—is a shuffle that opens with a passing resemblance to Joe Zawinul's "Mercy, Mercy, Mercy" and has an arrangement that gives it a big band feel. Veteran Scottish tenor player Bobby Wellins delivers a rich, swinging, solo on this tune and weaves some bop-influenced lines around McMillan's flugelhorn on what is probably the album's most left-field composition—"Palimpsest/Insensatez."

On the evidence of Palimpsest, Pack is capable of creating some interesting and enjoyable jazz, both as a composer and as a player. He's surrounded himself with some extremely talented players, who all deserve to share the credit for the album's quality, delivering a well-produced and varied set of tunes. Hopefully Pack has more jazz to come and if he can share its creation with the musicians on Palimpsest, then so much the better.