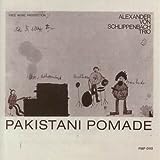 British saxophonist John Butcher recently asked me why his music is considered jazz. Sure, it's based on improvisation. Is that enough of a qualification? There are some connections with the American avant-garde from the '60s, including atonal experiments by Cecil Taylor and expansions of the saxophone's sound by Coltrane and Ayler. But in the end, as much as we all like categories, Butcher's music does not fall into any neat bin. "European free improv" is about as close as you can get, and even that is a murky moniker at best.

The genesis of this so-called school has its roots in '70s experiments in England (and specifically London) by rotating collectives. The Continental variety drew from the tricky dadaism of the Dutch school and the more seriously expressionistic variety from Germany. (The French, for the most part, were too busy eating Brie.)

In the case of 1972's Pakistani Pomade, originally released on the FMP label, the group includes pianist Alexander Von Schlippenbach, saxophonist Evan Parker, and drummer Paul Lovens. (German, English, and German, respectively. They still perform today.) The group carries a stalwart emphasis on color, texture, and density—of both the timbral and harmonic kind.

That manifests itself through the wide-ranging play of Parker, who in this case stays toward the brighter end of the spectrum, ranging from light thrusting whispers to squeaking, squawking cries. Lytton has his rare moments of linear timekeeping and outright melodicism, but for the most part he emphasizes rise and fall, twist and turn, crest and boundary.

Schlippenbach, for his part, takes a particularly oblique approach to harmony, with dense clusters and irregular intervals tending to crowd out the more open and resonant moments. As both a player and a composer, he adopts an architectural approach to sound. Three improvisers, playing as intensely and interactively as they possibly can, are barely enough to assemble the craggy structures that emerge here. So in some sense Pakistani Pomade is both a reflection of open possibilities and concerted effort.

Atavistic's Unheard Music Series has brought this recording back to print in an edition with four additional tracks (the 11 minute plus "Pakistani alternate #1" being a particularly dramatic example), original art, and newly unearthed photos of the group. (Man, what hair. What sweat. What serious concentration.) Nearly 20 years later the trio would record the similarly crisp Elf Bagatellen, another essential FMP classic.

Visit www.atavistic.com on the web.